Go Bears!  Go Knights!  Go Titans!  These are all cheers heard in the fall all across America.  We are in the midst of football season in the US and in this post I examine the importance of team names for participants and fans.  From age 5, boys and girls join the beginning level “Pop Warner Family” of over 5K teams.  Over 400K young girls and boys participate in football and various types of cheerleading activities (majorettes, pom-pom squads, and pep squads) under the auspices of the Pop Warner organization.  Players are classified into eight age-graded divisions (Tiny-Mite, Mitey-Mite, Junior Pee Wee, Pee Wee, Junior Midget, Midget, and Unlimited) ranging in age from 5-14.  While impressive, these numbers pale in comparison to the over 1.1M boys and girls participating in high school football.  Nearly 60K play football in college (almost 1700 girls play) and fewer than 2K professional make it to the professional level [1].  See Figure 1. 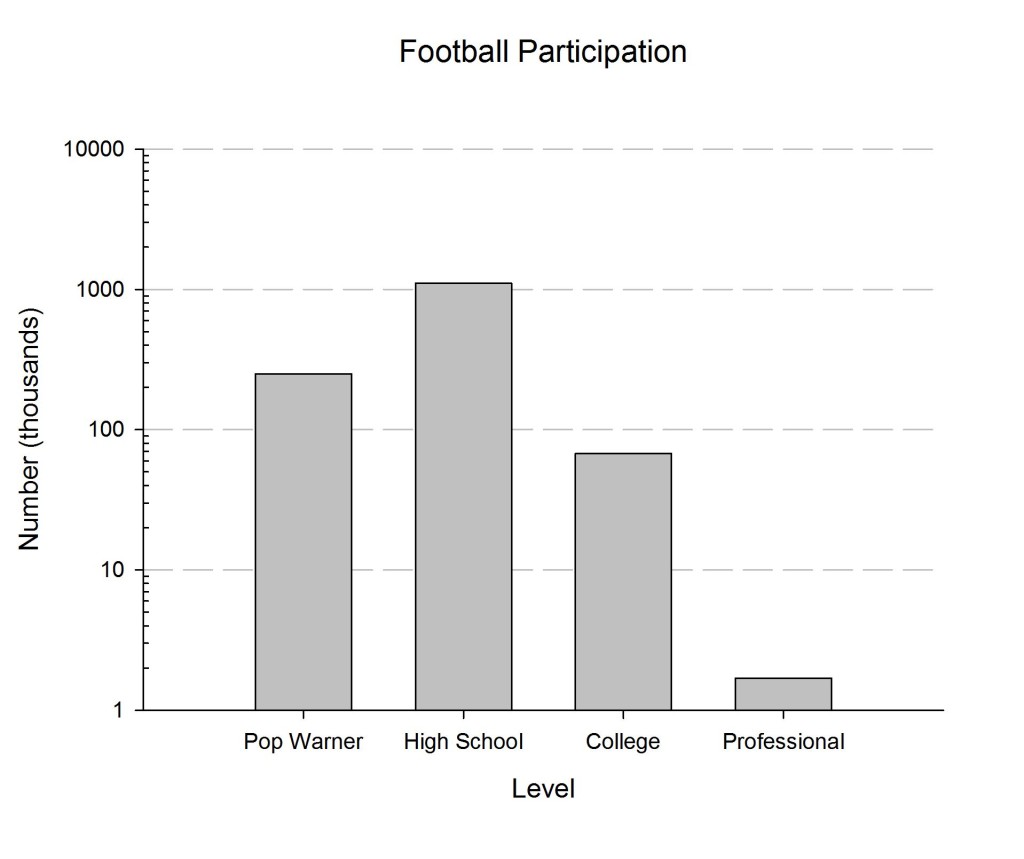 Number of Individuals Participating in Various Levels of Football Compet1tion

Teams adopt a nickname and fans become members of a loosely knit association that identifies with the school mascot, and the name becomes a totem for fans.  Totems are emblems of a group of people or kin group, and typically have a myth about their ancestry.  Initially, totemism was considered the province of indigenous people such as the elaborate totems and totemic ritual of the Ojibwa of the Pacific Northwest.  The totem was a symbol of identification with hereditary clan ancestors.  Prohibitions existed against killing totemic animals since humans were considered blood kin to their totems.

Ralph Linton, a distinguished American anthropologist, applied the concept of totemism in his research on US Army including the famous 42d Infantry Division, the “Rainbow Division”[i] as well as others.  He found that divisions selected their name from natural as well as manmade phenomena, and the name was the property of the group and was taboo for outsiders.  The name evoked an attitude of reverence and belief that the totem was the guardian of the division. [2, 3]

Football games are amazing cultural events.  Of course, there is the game, but there is so much more surrounding the game.  Like other leisure activities, people gladly pay for the pleasure of watching mostly young men (although women do play in all levels except professional) run up and down a field carrying an oddly shape ball, all the while avoiding the best efforts by their opponents to stop them.  All while they are attempting to reach their objective, the goal line.  Tackling, pushing, pulling (within limits), tripping (penalized if caught), and holding the opponent is all legal in the effort to stop forward progress.  I will resist further description of the contest itself, but by any measure it exceeds most others sports for sheer physical brutality.[ii]

Spectators are jammed onto metal benches that provide the absolute minimum space for an adult human.  Sitting in steerage on your favorite discount airline has nothing on the cheap seats at a football stadium.  Fans are often bizarrely attired in the colors of their team complete with face/body paint and masks.  During the game fans exchange verbal jabs with the opposition, all the while consuming copious amounts of alcohol.  Before and after the game totemic fans often share a ritual meal while sitting on their personal ritual site in a paved lot adjacent to the stadium.  Fans establish their own territories by setting up tents complete with ground covering, electric generators, televisions, and stereos.  Central to the pre and post-game activities is the consumption of a ritual meal.  Typically, various types of meat and chicken are grilled and served with various other prepared side dishes.  Alcohol is consumed in abundance both pre and postgame festivities.

There are several patterns in the choice of totems for teams. Many teams take names that refer the city or area in which the team has its home.  The Philadelphia 76ers and the New England Patriots reflect not only local history, but also beliefs about American national heritage and culture.

Teams often choose an animal as a totem.  It is important to select an appropriate fear-inducing species that signals toughness and ferocity to opposing teams.  Bulldogs, eagles, lions, badgers, wolverines, and tigers have been singled out as popular totemic names.  Teams often incorporate an example of their totemic species at their games.  The official mascot of the University of Georgia is Uga the Bulldog, an English bulldog, and is a direct descendent of a line of official bulldog mascots dating back to the 1950s.  Uga  not only attends all the games and enjoys a sideline view of the action.  Uga  usually wears a spiked collar and red jersey with the varsity letter.  At the games, he has an air-conditioned doghouse and reclines on bags of ice during the hot humid weather.

Interestingly, some teams have adopted animal totemic mascots that are not especially fearsome.  Anteaters, Banana Slugs, Black Squirrels, Blue Hens, Llamas, Peacocks, Sagehens, and Terrapins are some of the team totem animals that are not so formidable.  Nonetheless, fans of these teams still form a loosely knit groups that act collectively with enthusiasm comparable to teams with the most fearsome and dangerous totems.

In addition to locations and animals, plants have been chosen by some teams.  Buckeyes (horse chestnuts), Fighting Okra, Mighty Oaks, Sycamores, and Violets all leave me scratching my head.  Here comes the Fighting Okra?  Nonetheless, devoted fans of these totems abound.

Finally, some teams select a class of individuals as the totem.  For example, the Buccaneers, Knights, Marauders, Pirates, Raiders, Spartans, and Vikings all communicate images of power, strength, and physical dominance.  One would guess that teams would select fear-inducing totems, but that is not always true.  The Blue Boys, Bonnies, Deacons, Dirtbags, Fighting Christians, Hustlin’ Quakers, Ichabods, Missionaries, Monks, Ore Diggers, Pipers, Poets, or Profs do little to stir the competitive juices. 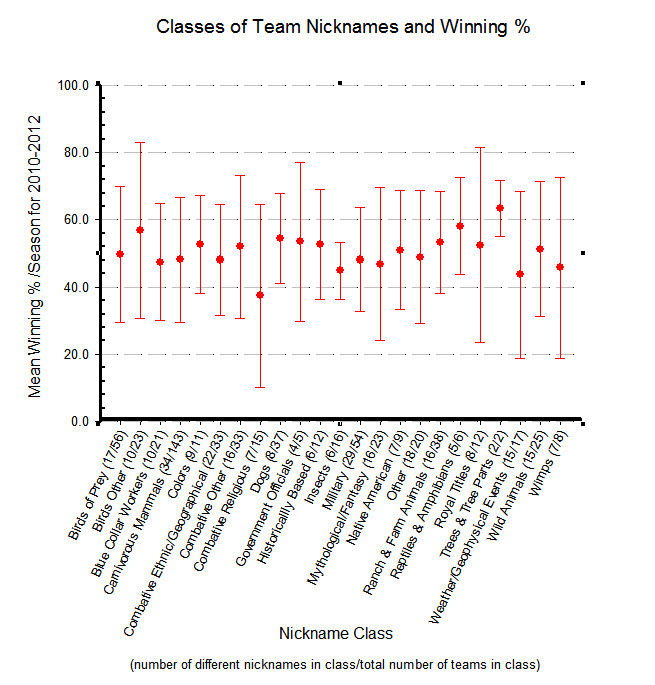 In order, to test my hypothesis that teams with ferocious or fear-inducing totems would be more successful than those with more serene, gentle, pacific totems, I surveyed all NCAA Division I, II, III, FBS, and FCS football teams’ records for 2010-2012.  I reviewed the won/loss records for all 619 NCAA football teams with nicknames[iii] and found that there are 287 different totemic names used by the teams.  Three seasons provide an adequate sample of the performance of each team, approximately 30 or more games.

Additionally, I classified the totemic team names into 23 different categories, reflecting the type of totem.  A list of the classes and their constituent teams is shown in Table 1.  The categories of teams were a subjective choice, as was the inclusion of any individual team names in a particular category.  It may have been preferable to use a multivariate statistical analysis to sort teams in clusters and then examine the won/loss records of the clusters, but that is the next step if someone is interested.

Figure 2 shows the mean winning percentage for all the teams in the each category.  Examination of the data reveals no statistically different categories.  Category means all lie within one standard deviation of each other.  Put another way, given the way that I categorized the teams, no category stands out as having a statistically greater winning percentage than any other group.

In sum, my hypothesis that fearsome and aggressive totems predict statistically significant winning percentages is not upheld.  In other works, let’s hear it for all the pacific, non-aggressive, wimps out there.  Your team totem makes no real difference.  However, it is likely that some team totems arouse greater enthusiasm and interest than others.  For football fans no matter what the team totem, it is their team.

[i] The “Rainbow” Division took part in four major campaigns in WI and saw 264 days of combat.

[ii] Save possibly for rugby.

[iii] The University of North Dakota will select a nickname for the 2015-16 season.