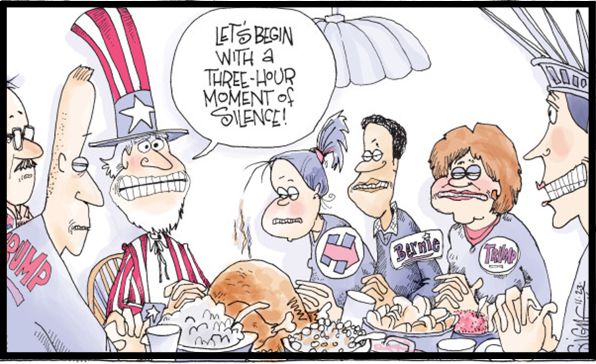 President George Washington proclaimed the first Thanksgiving on October 3, 1789, calling on the citizens to place their faith in “the providence of Almighty God,” and to be thankful for what was given to them.  President Abraham Lincoln acknowledged the plight of the most vulnerable, declaring a “day of thanksgiving, on which all citizens would commend to [God’s] tender care those most affected by the violence of the time — widows, orphans, mourners, and sufferers of the Civil War.”

Continuing the tradition, the President Barack Obama declared “by virtue of the authority vested in me by the Constitution and the laws of the United States, do hereby proclaim November 24, 2016, as a National Day of Thanksgiving.  I encourage the people of the United States to join together — whether in our homes, places of worship, community centers, or any place of fellowship for friends and neighbors — and give thanks for all we have received in the past year, express appreciation to those whose lives enrich our own, and share our bounty with others.

Not all Presidents have felt it appropriate and patriotic to proclaim such a day of thanksgiving.  Thomas Jefferson refrained from such proclamations during his presidency (1801-1809).  Jefferson wrote…

“I consider the government of the United States as interdicted by the Constitution from intermeddling with religious institutions, their doctrines, discipline, or exercises. … Certainly no power to prescribe any religious exercise, or to assume authority in religious discipline, has been delegated to the general government.”

“But it is only proposed that I should recommend, not prescribe a day of fasting and prayer.  That is, that I should indirectly assume to the United States an authority over religious exercises, which the Constitution has directly precluded them from … civil powers alone have been given to the President of the United States and no authority to direct the religious exercises of his constituents.”  In 1802, in response to a letter from the Danbury (Conn.) Baptist Association regarding his election as president, Jefferson used the phrase “a wall of separation between church and state.”  Jefferson relied on the Constitution as a guide over holiday proclamations.[i]

In my role, as “Curmudgeon Extraordinaire” I say “Bravo!”

As Americans, we assume that all citizens should celebrate Thanksgiving.  This is just another example of our country’s narcissistic and ethnocentric worldview.  I am convinced that not all British expats feel such gratitude.  Imagine what things would be like if we didn’t win the war.  I am also reminded that Native Americans might not harbor warm and fuzzy feelings about Thanksgiving, as we are celebrating the annexation of their homeland through warfare, torture and imprisonment of their combatants, and their relocation to substandard reservations far away from their homeland.  Larry Omaha, a Yaqui-Zapotec native American comic noted “My mother won’t celebrate Thanksgiving. She says it represents the white man stealing our land. But she’s not angry, she figures, ‘What the hell, we’re taking it back one casino at a time.’”

Actually, giving thanks for ones’ blessings is an afterthought at most Thanksgiving gatherings.  As Johnny Carson once said…” Thanksgiving is the day that you gather with relatives that you haven’t seen for a year, and are reminded why.”  For most families, it is a day of fun and excitement when excess is the guiding principle, usually capped off by an alcohol-induced disagreement over political or religious issues.

This year should prove to be a challenge for family organizers to keep the peace given the outcome of the Presidential election.  Law enforcement should be prepared for another holiday of mayhem and violence.  The NRA should unapologetically celebrate that so many people will be packing heat this year.  Look for the top news story to focus on the ability of intoxicated humans to resolve conflict efficiently and permanently with firearms.

I suppose I should have some advice for those attending such family events, but I don’t.  I avoid family dinners because I despise small talk, gossip, and football.  When I have attended such gatherings in the past I have succeeded in irritating most of my relatives and sending myself into a deep depressive state.

But for those of you celebrating this august holiday, I wish you good luck.