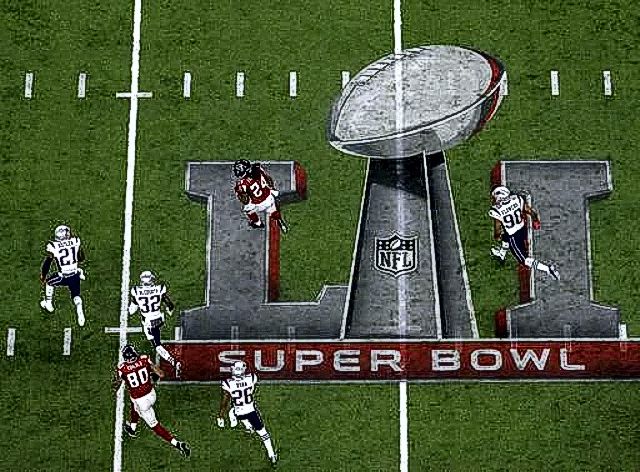 The Super Bowl (henceforth SB) is an American institution, a game watched by an estimated 110M people in the US and another 38M around the world.  Of course, this pales in comparison to the FIFA World Cup final watched by 900M around the world, but the World Cup is held every four years.[1]  SB is televised to an estimated 180 countries, streamed live on the Internet, and translated into 25 languages.  The SB has grown in every measure since its inception in 1966, and today is truly an American extravaganza with everything done in typically American fashion — over the top.  Like Disney World, the Mall of America, the world’s tallest roller coaster, and supersized fries, we live in a land of excess, so why should our games be any different?

To support my contention, a few tidbits about the SB illustrate my point:

So, why do millions of people watch the Super Bowl?  As a quintessential American sporting event, this year’s spectacle was highlighted by an action-packed infomercial from our President, Lady Gaga and her Broadway glitz and glamour, endless analysis by talking heads, as well as what some have described as the best game in Super Bowl history. 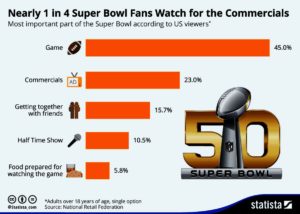 According to the National Retail Foundation for the 2015 Super Bowl less than half of those surveyed were most concerned about the game itself.  Nearly one in four were more interested in the commercials.  Considering that 110M people reportedly watched the game, this means that over 25M people watched an event, not for the event itself, but for the paid commercials by American businesses.  See Figure 3.

In a separate study, the Huffington Post survey obtained similar results on a separate sample, but with additional details.  Table 1 shows that almost half of male viewers were interested primarily in the game, while only 20% of females were so motivated.  Interestingly, almost equal proportions of the <30 and 30-44 age groups were concerned with the game and commercials, while older respondents favored the game and not the commercials.  That such many viewers were primarily interested in the commercials presents an unprecedented opportunity for American business.  And hence their willingness to pay handsomely for the opportunity to parade their ware in front of the buying public.

Table 1:  Why Do People Watch the Super Bowl?

Ads for the SB are big business.  For the SB this year advertisers paid nearly $5M for a 30-second ad.  Since its inception, the marketing potential has been recognized and exploited by the major television networks.  The rates for a 30-second commercial from 1967-2015 are shown in Figure 5. 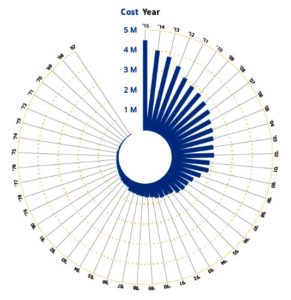 One quarter of those who watched did so because of the commercials.  Think about it.  What would someone have to pay you to sit for 3-4 hours to watch intermittent television commercials?  For those interested in the game, the data are staggering, but in an unexpected way. Excluding commercials and FOX self-promotion advertising, the time the ball was in play for a scant 8.61% of total air time, while nearly 30% of air time was devoted to paid commercial and FOX self-promotion.  Other activities are shown in Figure 5.  In all fairness, the largest proportion of time was devoted showing the field without the ball in play.  Viewers spent over an hour watching grown men stand around in small groups scratching, spitting and patting each other on the butt.  If you add replays to that total virtually half the game was game filler, one third was commercials, and the remainder was taken up with the halftime show, the halftime report, miscellaneous
activities, and the game itself. 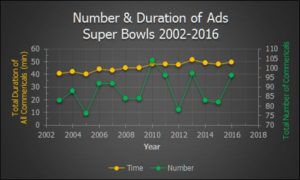 While the SB is touted as the football world championship, it is nothing more than an outrageously expensive venue for advertising.  I dare say when asked most people would be reluctant to spend three and a half hours simply to watch ads.  Even sadder, are the “fans” who drank of Kool-Aid and bought a ticket.  Only in America, land of the free and
home of the gullible. 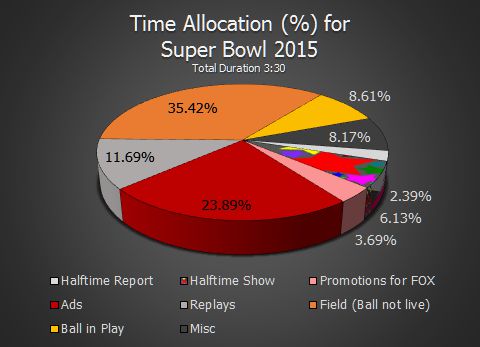 Figure 6: Time allocation during the SB.