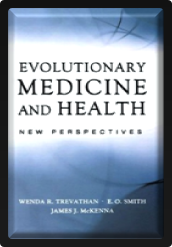 Building on the success of their groundbreaking anthology Evolutionary Medicine (OUP, 1999), Wenda R. Trevathan, E. O. Smith, and James J. McKenna provide an up-to-date and thought-provoking introduction to the field with this new collection of essays. Ideal for courses in evolutionary medicine, medical anthropology, and the evolution of human disease, Evolutionary Medicine and Health: New Perspectives presents twenty-three original articles that examine how human evolution relates to a broad range of contemporary health problems including infectious, chronic, nutritional, and mental diseases and disorders. Topics covered include disease susceptibility in cultural context, substance abuse and addiction, sleep disorders, preeclampsia, altitude-related hypoxia, the biological context of menstruation, and the role of stress in modern life. An international team of preeminent scholars in biological anthropology, medicine, biology, psychology, and geography contributed the selections. Together they represent a uniquely integrative and multidisciplinary approach that takes into account the dialogue between biology and culture as it relates to understanding, treating, and preventing disease. A common theme throughout is the description of cases in which biological human development conflicts with culturally based individual behaviors that determine health outcomes. Detailed, evidence-based arguments make the case that all aspects of the human condition covered in the volume have an evolutionary basis, while theoretical discussions using other empirical evidence critique the gaps that remain in evolutionary approaches to health.

Evolutionary Medicine and Health: New Perspectives features an introductory overview that covers the field’s diverse array of topics, questions, lines of evidence, and perspectives. In addition, the editors provide introductions to each essay and an extensive bibliography that represents a state-of-the-art survey of the literature. A companion website at www.oup.com/us/evolmed offers a full bibliography and links to source articles, reports, and databases. Written in an engaging style that is accessible to students, professionals, and general readers, this book offers a unique look at how an evolutionary perspective has become increasingly relevant to the health field and medical practice.

Each chapter in this collection duly discusses its own limitations, and I have made clear some quibbles above, but in general, the chapters are well written and highly informative. Taken together, the chapters in the book, and the editors’ additions, provide a comprehensive, insightful look into the ?eld of evolutionary medicine that would likely not be obtained in a self-compiled class reader. The book does not speak only in the abstract, but provides applications for evolutionary theory within the medical field as well. The selection of chapters covers all main aspects of the field, making this a very good text for introductory classes.

The way the volume has been structured by Trevathan, Smith and McKenna … makes it perfectly suitable for senior undergraduate and graduate students in anthropology, medicine, genetics and biology, as well as for researchers and scholars in general interested in developing a more profound background on evolution and the many implications it has in the well-being of modern human societies.

This edited volume is a successful sequel to the first Evolutionary Medicine and Health by the same editors (1999). That there has been suffcient growth and development in the last decade to require a thoughtful new compendium testi?es to the vibrancy of the field. On the whole, this thoughtful collection is a solid and important synthesis of an evolving discipline.

The greatest contribution of Trevathan, Smith and McKenna’s edited volumes—both the original 1999 and this newly released 2008 volume—is that they compile the work of scholars from all these disciplines, spanning years of work, in concise, theory- and data-packed chapters that summarize the state of the field. Together, these two volumes chart the progress of the field. Trevathan et al.’s earlier volume (1999) surveyed the state of the field, and the current volume brings us up-to-date with much of what has been learned since. In this regard, Trevathan et al. provide a great service to the field. Evolutionary Medicine and Health is a comprehensive and balanced overview of a wide variety of topics and issues that concern scientists in the field. It is theoretically rigorous and rich in data. What could be more important than trying to understand why we are the way we are in an age when we still struggle to de?ne ‘‘health’’ in a satisfactory manner? The evolutionary perspective has immense power to begin providing answers, and this volume compiles much of what has been learned to date.
Bravo