CNN premiered the movie Blackfish last week.  The movie tells the story of Tilikum, a 6-ton performing whale (Orcinus orca) that killed three people, two trainers and one park visitor, while in captivity.  Directed and produced by Gabriela Cowperthwaite, Blackfish is a documentary of the life of a killer whale, from his capture off Iceland to his life at SeaWorld in Orlando, Florida.

Why should performing whales and cuddly pandas be of interest on this blog?  Once again, just when you thought corporate America as well as the non-profits were doing the right thing, we find out it is about the money.

When I think of animal exhibitors, I am reminded of places like Uncle Dave’s Exotic Reptile House and Museum that my family passed on the way to Florida for vacation.  While many are unregulated, the more reputable enterprises are.  Every year millions of people of people visit SeaWorld and the other 2,400 animal exhibits licensed by the United States Department of Agriculture around the US, spending billions in the process.  Depending on the species exhibited, facilities must be licensed and inspected by the Environmental Protection Agency, the Drug Enforcement Administration, the Occupational Safety and Health Administration, and are governed by the Endangered Species Act, the Animal Welfare Act, and the Migratory Bird Treaty Act.  However, not all animal exhibitions are equal.  Of licensed animal exhibitors in the US, fewer than 10% are accredited by the American Association of Zoos and Aquariums, the leading independent organization for maintenance of rigorous standards in animal welfare, veterinary care, wildlife conservation, scientific research, education, staffing and safety.  Such accreditation is not only difficult to achieve, but it is very expensive. 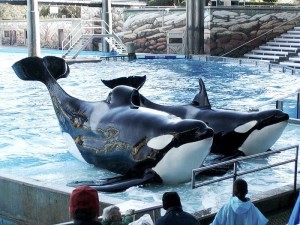 Animal exhibits are not maintained for the edification and enjoyment of visitors, it is about prestige and money.  Under the right circumstances, the exhibition of exotic animals can be very lucrative.  The subject of the Blackfish documentary is Tilikum, who is housed with 22 other killer whales at three SeaWorld parks.  Tilikum is a moneymaker for SeaWorld, not only because of his act and reputation, but also as a breeder.  The entire marketing campaign for SeaWorld exploits killer whales as its theme.  Orcas are extraordinary animals with highly developed brains, elaborate vocal communication that some would call language, and a stable matrilineal society.  Their impressive size and extraordinary intellectual abilities make them a no-brainer as a box-office attraction.  In addition to his entertaining act, Tilikum’s value as a stud is impossible to pin down according to authorities.[1]  The estimated value of a killer whale is in excess of $10M.  Visitors to SeaWorld pay $82.00 per person to sit in the splash zone or to take pictures of their kids petting one of the killer whales.  In the first 6 months of 2013 SeaWorld Entertainment Inc., who operates eleven theme parks in the US enjoyed almost $600M profit and is now traded on the New York Stock Exchange.

Leave it to Americans to figure out how to take wild animals out of their natural habitat and exploit them for profit.  While modern zoos tout their value as educational resources and their in efforts to conserve rare and endangered species, these claims are difficult to maintain and their value as an educational and/or conservation is almost impossible to quantify.  Let’s face it, zoos are very expensive, a fact that any pet owner should appreciate.  Typically, public zoos receive modest support from their local governments.  Unfortunately, in times of financial scarcity these funds are the first to be cut, for after all it is just a bunch of animals.  When confronted with outcries from constituents about education, public safety, and transportation, zoos are easy to ignore.

Any self-respecting city in the US and the world has to have a zoo as a status indicator.  Just like Medieval Europe, a menagerie or zoo is a status marker for the wealthy, as well as for many cities.  The sad truth today is that most public zoos are woefully underfunded and animals live in substandard conditions and receive substandard care.  Out of sight and out of mind is all too often the fate of zoos in US cities.  In 2006, the Detroit City Council voted to close the zoo for financial reasons.  Only through the intervention of the state legislature and the passage of a zoo tax could the zoo remain open.  Unfortunately, many public zoos are not so lucky.  The Tygerberg Zoo near Cape Town, South Africa, and the Jerez de la Frontera Zoo in Spain have closed or on the verge of economic disaster.  All public zoos in Costa Rica are to be closed within two years.  Zoos all over the world have to scramble in hard economic times.

Zoos rely on revenue from admission and gift items for a significant portion of their operating income.  The most successful zoos are the ones that have the most innovative attractions for visitors.  For example, the San Diego zoo has “behind the scenes” pass so that visitors can meet “animal ambassadors” and their trainers for the healthy fee of $99 per person plus the $44 admission fee for individuals 12 and older (children 3-11 gain bargain admission for $34).

The National Zoo in Washinton, the Atlanta Zoo, the San Diego Zoo, and the Memphis, Tennessee Zoo all have panda cams.  These remote cameras allow the giant pandas to be viewed over the internet from the comfort of your own home while they sleep, eat, sleep, care for their young, sleep, and…  well you get the picture.  It is true that pandas have a particular appeal for humans and zoos are using technology to exploit it.  Such efforts have increased attendance at those zoos and have, no doubt, increased the sales of cuddly plush pandas, baby pandas complete with green bamboo leaf, and extra special two foot tall soft furry pandas at the bargain price of $124.95.  It is estimated that the birth of a panda at the Edinburgh zoo could generate £48M (approximately $70M) for the Scottish economy.[2]  Like killer whales, pandas (Ailuropoda melanoleuca) are a signature species for animal exhibits.

In these difficult times for the people who frequent zoos, is it reasonable from a business point of view to raise prices to keep up with the escalating costs of upkeep, capital improvements, veterinary care, staff, etc.?  Imagine a visit to SeaWorld for a family of four can easily cost $1000 if transportation and lodging are included.  Is it really a vacation to see wild animals perform tricks?  Are we comfortable keeping 5-ton mammals in postage stamp sized enclosures or resorting to voyeuristic remote cameras simply for our enjoyment?

Public and private zoos officials counter the economic argument with accounts of their education and conservation efforts.  While it is true that some of the very well-funded zoos have spectacular educational facilities and employ professionals to offer quality education about their zoological, as well as botanical offerings, most don’t.  At best, most underfunded zoos have volunteers that act as their educational staff.  While well intended, these people are given scripted answers to FAQs that are easily found on the internet.  Is simply seeing a live animal worth keeping them in substandard conditions and often in solitary confinement?  Zoos, all too often, are nothing more than an excuse for a student field trip and day away from classes with little lasting impact.  Oh sure, some will say, but I knew someone whose daughter became a ______ because of her experience at the zoo.  Of course, we will never know the career path of the child if she had not gone to the zoo, so I find those anecdotes unconvincing at best.  No objective data exist that verifies the contention that zoos have any lasting educational impact.

As to the conservation work of most zoos, I also have serious concerns.  One of the great problems confronted by keepers of wild animals is reproduction.  Often zoos have a single example of a species, and if they wish to breed the individual, it has to be shipped off to another facility.  The net result of breeding within very restricted populations is the deleterious effects of inbreeding.  There are 45 orcas in captivity with 32 being captive born.  Tilikum has sired 11 if these individuals.  No self-respecting geneticist would argue that is a sufficiently large population to maintain genetic diversity.

Zoos and aquaria do have limited conservation programs that in a few cases have had an impact on wild populations, but if the truth were told, the funds devoted to conservation in the wild are simply cover for the businesses from animal rights activists.  Even the most prestigious institutions have insufficient resources to make a real dent in the loss of diversity in the natural habitat.  For both land and sea plants and animals, it is not the individual species that must be of concern, but it maintenance of large tracts of undisturbed habitat.

We are at an economic, ethical, and practical point where the right decision is to dramatically reduce the number and scope of captive animals populations, close all facilities that don’t met strict requirements for animal health and well-being, and take seriously our role in the stewardship of the animals and plants with whom we share this small planet.  Finally, don’t kid yourself that your admission to SeaWorld is really going to have any impact on the habitat of killer whales, just the bottom line of another US corporation.