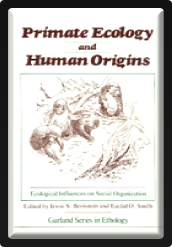 In 1957, Paul Fejos, the ingenious first director of the Wenner-Gren Foundation for Anthropological Research Inc.m negotialted the purchase and supervised the modernization of a 12th century Alpine castle to which exclusive groups of scientists were invited and where they were incarcerated for a week or more while the intensively discussed a wide range of anthropological topics….some very sobering thoughts about the state of the art in primate socioecological studies come down from the mountain. Primate Ecology and Human Origins is thouroughly and intelligently edited…In general, Primate Ecology and Human Origins perpetuates the fine tradition of Wenner-Gren symposiia. This redoubles or regreat that the Western economic dip has forces the closure of Burg Wartenstein.

The book includes 13 chapters plus an excellent summary chapter written by the editors. In addition, Bernstein and Smith guide the reader through the various chapters by an introduction to each chapter which also acts as a coxswain for maintaining chapter continuity. A major tenet running throughout the book is the attempt (and I believe successful) to encourage a broad perspective when thinking about the multi- tudinous relationships between social organiza- tion and ecology. There is no endeavor to “prove” how a certain social organization evolved in response to a particular ecological setting. How refreshingypes of ecosocial behavior. This is essentially a well-balanced volume on primate ecology and should make a welcome addition to the library of any student of primate ethology.