Most people are not particularly good at anything.
Those with low self-esteem probably earned it.
George Carlin

It is all Al Franken’s fault. If Franken had not come up with the character Stuart Smiley from his days on Saturday Night Live, we would not have this problem. “I’m good enough, I’m smart enough, and doggone it, people like me,” is the essence of a pop psychology that has infected almost all of Western society. People are obsessed with the idea of self-esteem, and go to extraordinary lengths to elevate their own, their children’s, and in some cases, anyone else’s within shouting distance. Today, children hear self-affirmations by the time they reach kindergarten. Children are told that they are “the best”, “special,” “unique” or otherwise “extraordinary,” regardless of the objective differences in what their report cards say or the final score in their soccer match.

Parents have gotten the self-esteem message loudly and clearly. Through daily exposure at home and school to a barrage of self-affirming messages (“I am the best,” “I am a miracle,” or “I am special”), many children have developed an artificially inflated sense of self-importance. Advocates claimed that high self-esteem children are better able to take on all sorts of challenges and succeed. Fueling this artificially-inflated self-esteem movement are schools, as well parents. Many school districts have made a conscious effort to eliminate competition in the classroom because of the possibility of hurting the feelings of those who are less intelligent, talented, or industrious.
Self-esteem advocates in Nashville, Tennessee, recently struck a major blow for academic mediocrity. No longer will the names of children who make the honor roll be made public. Parents now have to grant written permission for their child’s name to be made public as recognition for academic excellence. School assemblies that honored academic excellence have been canceled. This policy arose after some parents complained that honor rolls made children that did not excel feel bad about themselves. It seems to me that a bit of public exposure might be good for some students. Students at many high schools across the country no longer have to listen to remarks by their valedictorian because schools have discontinued the practice of naming a valedictorian.

Competition is becoming a dirty word in American society. The labels “Winner” and “Loser” are shunned. Emphasis is placed on making people feel good about themselves, regardless of their true accomplishments or abilities. Students who enter local science fairs are given a ribbon just for entering. Everyone who enters a charity-sponsored “fun run” gets a tee shirt. Bumper stickers claim that everyone’s a winner at school X. Competitive games should also be modified to encourage cooperation, according to some “elevate self-esteem at all costs” advocates. The new outcome of musical chairs is not to compete for a chair in the dwindling pool of chairs, but to fit everyone onto the existing chairs. The self-esteem advocates argue that games that require teams to choose players should be done away so that individuals do not feel that they are being shunned by their peers. 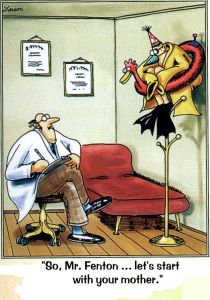 In their efforts to minimize competition and the specter of low self-esteem, the Soccer Association of Midlake, Ontario, Canada, has removed the ball from all youth soccer games and practices. Yes, you read that correctly: by removing the ball, it is absolutely impossible to say that this team won and this team lost. Sport is not about competition, rather it is about using your imagination. If you imagine you are good at soccer, then, you are.[1]

Some schools have gone to equally ridiculous extreme of doing away with students sales of tickets to fundraising events, because selling tickets to a school event is competitive, with a prize was given to the student that sold the most tickets. Holiday door decorating competition in some elementary schools has been axed for fear that feelings will get hurt because there are differences in artistic abilities among students and teachers. Just imagine the psychological devastation that might ensue for teacher and students if one class demonstrated greater imagination, creativity, and ability in designing a door decoration. [2]

Despite its widespread acceptance, some scholars have expressed doubt about the reputed benefits of elevated self-esteem. One of the most serious critics is Roy Baumeister, a professor of psychology at Florida State University. Early in his career, Baumeister drank the self-esteem Kool-Aid and thought that enhancing self-esteem was a good thing. By the late 1980’s, Baumeister became convinced that the promised benefits of the self-esteem movement had not materialized. Baumeister then considered the types of data used to generate conclusions about the beneficial effects of increased self-esteem. Like much research in psychology and other social sciences, data were collected using self-reporting questionnaires. Individuals were asked to fill out questionnaires about themselves—were they more attractive, smarter, or better liked by others than average?

The problem with these data is that there is no way to assess the validity of the responses. Were the people who rated themselves more attractive than average, actually judged to be more attractive by their peers? The lack of any controls worried researchers interested in why people do what they do. Baumeister and his colleagues attempted to address the self-reporting bias by devising laboratory experiments to test this major hypothesis.
Baumeister was the first to find results contrary to the accepted dogma of the self-esteem empire. Contrary to popular belief that high self-esteem buffered individuals from negative behaviors, Baumeister found that high self-esteem could play a powerful causal role in aggressive behavior. High self-esteem, under the right set of conditions, can lead to hostility, and even violence against others. High self-esteem supported by nothing more than assertions, was much more likely to lead to hostility and aggression, than low self-esteem. Of those with high self-esteem, narcissists were particularly prone to aggressive behavior, much more than individuals with just overly inflated self-esteem.

If these results are true, what do we do with the educational programs, encounter groups, and personal products aimed at boosting self-esteem? Given these data, it seems reasonable that we could abandon many self-esteem efforts and redirect our resources toward enhancing academic performance based on knowledge, not on some “feel-good” notion of self. We could abandon efforts to elevate self-esteem as a fundamental technique to improve the quality of our social relations. We could promote acceptance of responsibility and ethical treatment of others as primary building blocks of social interactions. Finally, while increased self-esteem increases happiness in the short run, attention must be focused on the long term techniques of acquiring self-esteem. Long term increases in self-esteem can only be based on performance and actions, not echoes of empty praise. Over-inflated egos are standard equipment for most students attending college today. Students generally think that they are better than they really are. The realization that in the real world, “everyone is not a winner” nor is everyone special, unique, fantastic, or a miracle, is a tough lesson for students.

When Americans realize that the lessons of history have something to teach us about conditions today, will we begin to reverse the rising tide of mediocrity? Should we? Competition within bounds is healthy, appropriate, and important in understanding what it means to be human. I am not advocating a society based on ruthless competition with no regard for the consequences of individual behavior. On the contrary, competition with compassion and understanding is the best way to instill values that contribute to larger social goals. Recognition of the inherent differences in people rather than trying to pretend they don’t exist, with platitudes about self-esteem, might go a long way toward achieving reasonable solutions to problems of disproportionate access to resources and services in our society. Plus, it engender a healthy respect for the individual and a more unselfish appreciation for, and recognition of, that which is truly special.

So what is the “take home message” about self-esteem? We need to be judicious in dolling out praise. We need to be certain that what we are praising is desirable behavior. A little honesty would be nice. Researchers have found that enhancement of self-esteem reduces the incidence of bulimia among some young women. Clearly, a case can be made for a therapeutic intervention to boost self-esteem among bulimics, but in the vast majority of cases, artificially elevating self-esteem has not proven to change behavior in positive ways, and in fact, has been demonstrated to have some strong negative consequences.

Boosting self-esteem as a reward for ethical behavior and worthy achievements is wholly appropriate. Self-esteem should be used as a reward, not as a punishment. In sum, we need to overhaul our ideas about elevating self-esteem. Educational and social programs need to be more concerned about ensuring there are consequences for unethical or harmful behavior and that they are not rewarding laziness and substandard performance. People need to be able to make honest comparisons of themselves with others and not boost themselves at the expense of others.