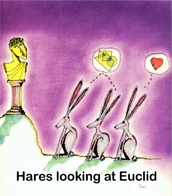 1.  To provide new data and analysis rather than simply rehashing old news.  I take on current issues in politics, science, economics, healthcare, and popular culture and look for an explanation why the events occurred.  Plenty of bloggers talk about the immediate causes of an event, like lack of critical speed in an aircraft crash, failure of politicians to make good on election promises, or lack of preparation for a poor athletic performance. This blog is different from others in that I look to the deeper reason why people do what they do.  Is there something in our basic biology that predisposes us to behave in a particular way, or raises that mental red flag about a situation? Humans have a long and sometimes distinguished history that should be impossible to ignore, but so many commentators seem oblivious to our past.  Using more than a historical perspective, but one firmly based in an understanding of our evolutionary past, is crucial in developing of a deep understanding of human behavior.  It is an evolutionary perspective that makes this work distinct.

2.  To make observations on many aspects of human behavior that most people assume have no basis in our biological makeup and reflect only our cultural background and early experience.  Moreover, I will offer suggestions that one might employ to bring about desired changes in human behavior and action using an evolutionary perspective.

3.  To offer my opinion about many current issues and develop ideas that I will incorporate into a revision of my book When Culture and Biology Collide.  The book looks at aspects of modern human behavior from an evolutionary perspective.  I offer some observations on a variety of issues including road rage, elective cosmetic surgery, and teenage pregnancy to name a few.  Shameless, self-serving plug.

While I look at the human experience from the perspective of an evolutionary anthropologist, I want to be clear that I do not suggest that our evolutionary past is a justification for current behavior.  While implicit in an evolutionary perspective is the recognition that our genes influence a portion of our behavior, it is not an excuse for unacceptable or antisocial behavior.  The “It’s in my genes” argument just doesn’t work.

We are an intensely social species relying on group living for our evolutionary success.  Our unique mode of locomotion, our big brains, and our fully opposable thumbs give us powerful anatomical and physiological advantages in competition with other species, but these adaptations come with a host of underappreciated costs and unintended consequences.  I intend to explore how we interact with our environment and how our adaptations both enhance our competitive success but reduce it as well, often simultaneously.

Finally, I must confess that I embark on this journey with more than a little fear and trepidation knowing that some who read what I have written will strongly disagree. I invite a spirited discussion of ideas and relish a good debate.  The important point is that the discussion is about ideas, there is no room for argumentum ad hominem. I hope that no matter what the topic there will be room for an intelligent and civil discussion of ideas and opinions.  It is only through a free exchange of ideas that we move forward in our understanding of the complexities of our daily lives.