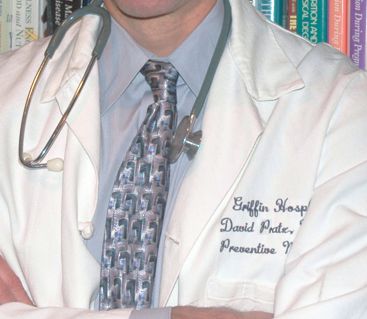 White lab coats make a fashion statement.  In their purest form, they are ceremonial dress with deep symbolic connections.  Mid-calf length, white, with side pockets, left side breast pocket, often stiffly starched, and complete with blue embroidered status identification, the lab coat is a symbol in medicine and science.  Wearing a white lab coat provides considerable information about an individual.  Studies have shown that many patients, particularly older adults, prefer physicians that wear a lab coat.  Female physicians report changes in behavior of colleagues when wearing a lab coat, compared to typical business attire.  The lab coat signifies something about the training, seriousness of purpose, and attention to detail, all positive characteristics of medical and scientific professionals.

The symbolic power of the white lab coat is reinforced to medical students through the White Coat Ceremony.  Since the latter part of the 20th century, many medical schools in the US conduct a ceremony before incoming students have attended their first lecture or laboratory.  During this ceremony, appropriate members of the administration and faculty welcome the incoming students, but more importantly all the incoming class are presented short white lab coats.  After the presentation of the coats, there are typically more speeches emphasizing the essence of medicine and the ethics of healing, but the important part is the lab coat.  Friends and family of the new initiates often attend these ceremonies and festivities, all contributing to the symbolic significance of the white coat.

Careful examination of lab coat culture reveals symbolic status differences.  For example, while medical students and interns wear the short white coat, long white coats are reserved for residents, or “real” doctors.  Other medical professionals wear lab coats and for some they are actually functional, but for physicians they are largely symbolic.  Imagine the effect of one wearing a lab coat stained by reagents, with frayed sleeves and an ink stain on the pocket.

While the external appearance of the white lab coat is widely recognized, a recent study examined the effects of the lab coat on the wearer’s psychological state.  Adam and Galinsky report on the physical effects of wearing a lab coat on the wearer’s cognitive processes, particularly the wearer’s attention to detailed tasks.  They found that individuals who wore a lab coat displayed increased selective attention compared to participants who wore regular attire.  In a related experiment, Adam and Galinsky[i] found that subjects who were told they were wearing a doctor’s coat, compared to those told they were wearing a painter’s coat, scored significantly higher on attention related tasks.  In both cases, subjects were wearing the same type of coat, differing only in assigned meaning.

This study shows not only the influence of the lab coat on others, but on the wearer as well.  Of course, a cautionary note is in order.  This study has not been replicated and involved only 74 subjects.  Nonetheless, the study offers an insight into the effects that wearing a particular type of clothing has on the wearer.  Does wearing a black robe make a judge more ethical?  Does wearing an expensive suit make the wearer feel more powerful?  Is there something to the notion of a power tie?  Does the uniform of a firefighter or police officer make people act more selflessly?

That we use clothing in a symbolic way makes sense in the course of human evolution.  Recognition of clear and consistent status markers certainly was adaptive and signaled appropriate modes of behavior and conduct.  Such non-verbal cues are important in assessing social situations and behaving in ways that were likely to be fitness enhancing.  Maybe there is something to the saying that clothes make the man (or woman).