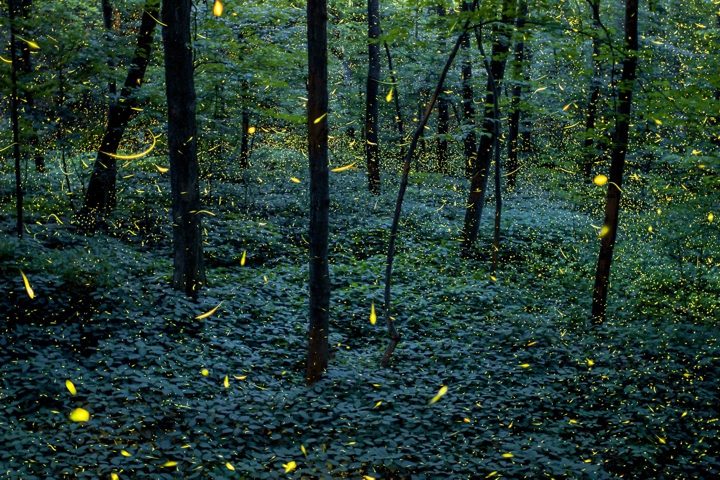 Summer has arrived in Atlanta. If high temperature, sweltering humidity, the Peachtree Road Race, and mosquitos were not enough, bullfrogs and fireflies treat us to a visual and auditory display on a summer evening.

We have all heard bullfrogs (Lithobates catesbeianus) and seen the blinking of fireflies (Photuris lucicrescens) on a summer evening. Besides being a diagnostic marker for summer, these two groups of animals share a behavior with humans and many other animals – both are deceptive. In fact, one has developed one of the most impressive array of deception tactics of all animals.

American bullfrogs are large frogs, weighing 1.5 lbs (750 g) and are 8 inches (20 cm) long, excluding the legs. Common throughout the eastern United States, bullfrogs inhabit large, permanent bodies of water. Bullfrogs are voracious, opportunistic ambush predators and will eat anything that they can get in their mouths including small rodents, amphibians, reptiles, birds, bats, fish, tadpoles, snails, insects, and other frogs.

The chorus of adult males is hard to miss, but why do males croak? Males croak to advertise their territories, to announce their intentions to engage in combat, and to attract females. Males are territorial and disperse themselves in sites that are 10-20 feet apart. Males compete with each other for preferred territories that have the optimal temperature and water conditions for females to lay their eggs.

For bullfrogs, size is a big deal. Not only does size predict fighting ability, or in the case of 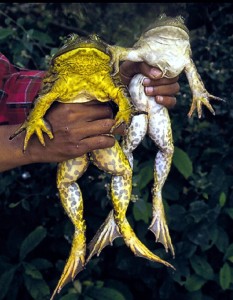 male bullfrogs, wrestling ability and the ability to hold onto a preferred territory. Interestingly, females are actually larger than males, but their size appears to have little to do with fighting ability, but more with egg production. Since frogs are external fertilizers (females lay as many as 20,000 eggs in a mass and then fertilized), males who have the most attractive territory have the most mates.

Big males, holders of the choice territories, are big croakers. Males are advertising their competitive abilities to dissuade other males from an attempted territory takeover, as well as to attract females. Females are attracted to male choruses and seek out the most attractive territory. In order to croak, males inflate themselves in a similar way to filling up a child’s water wings. Fully inflated males float much higher in the water than non-croaking males and females. Less successful males (losers in the croaking contest) approach territorial males, but since they are non-croakers they swim low in the water and are often mistaken for females by territory holders. These subordinate males then attempt to intercept females or wait for a territorial male to leave a territory and then take over the territory without having to fight. By assuming the posture of a female, subordinate males are able to mate successfully with a few females. While not enjoying great reproductive success, they are sufficiently successful for this strategy to be maintained in the population.

So, in addition to being a conspicuous feature of summer, male and female bullfrogs are engaged in a struggle for successful mating opportunities. Young males cannot outcompete territorial males, so they can use deceptive tactics and deceive territory holders by acting like females. Such is the life of a male bullfrog. Of course, females have developed good radar for detecting choice egg laying territory and do their best to thwart the amorous advances of cheater males. Deception and self-interest are the keys to frog reproduction.

Fireflies, or lightning bugs as we called them when I was growing up, were a fascinating part of summer nights for kids in my neighborhood. Of course, we were responsible for the untimely death of legions of fireflies, but catching them and putting them in trusty Mason jars with holes punched in the lid was great fun. While we thought the blinking fireflies were cool and worthy of careful examination, if PETA had been interested in fireflies we would have all been on their blacklist. What we did not know is the fascinating behavior of these creatures. 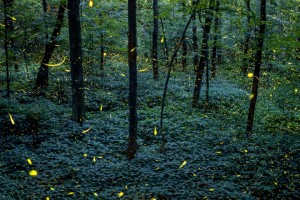 Fireflies are not flies at all, but are members of the Coleoptera, the beetle family. There are approximately 2,000 species of fireflies throughout the world in temperate or tropical environments. On a summer night in the eastern United States, it is possible to see as many as 20-30 species of fireflies. Two groups (genera) are particularly interesting and are well-represented in these nightly displays. Their names are very similar so you have to pay attention to see the story unfold. Photinus fireflies are small, about half an inch long and produces a yellow green light. Photuris fireflies are almost twice the size of Photinus and produce a dark green light. The conspicuous flashes, it turns out, are not just for the enjoyment and entertainment of humans, but are essential in firefly life. This is where it gets a bit complicated. Photinus pyralis males emit a flash of about 0.3 seconds every 5.5 seconds. Given that there are many species of firefly in a relatively small area, the exact pattern of flashing is critical to males locating mates. Females stay on the ground or in low cover while males display. Female Photinus pyralis flash about two seconds after males. This acts as a locating beacon for males, who descend to the ground and mate with females. The signaling makes sense given the number of other species present coupled with a very short lifespan (5-30 days), so efficiency in mating a high priority. Male Photinus pyralis advertise to females and males with brighter flashes to attract more females. All of this is predicted by natural selection, with males and females acting in such a way so as to maximize their genetic representation in future generations.

A closely related species, Photuris pyralis, is particularly interesting. The general mating pattern is similar to Photinus, but it is after mating that things get interesting. Photuris pyralis fireflies, unlike Photinus pyralis seek food as an adult. Photuris females go looking for a snack after mating with a male. They attract a bite-sized snack in the form of a Photinus male by mimicking the flashing pattern of a female Photinus. Photinus males approach Photuris females and before they can attempt to mate they are attacked and eaten by the larger Photuris females, the femme fatales of fireflies. Photuris females are capable of mimicking males of several other species by changing their flashing pattern in response to the number of prey species males present. Such complicated patterns of deception are unparalleled among invertebrates as well as many vertebrates. 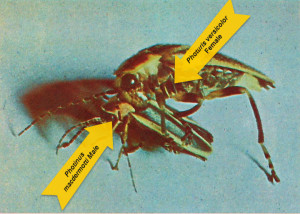 Figure 3: After she has mated, the Photuris female preys on males of other species by imitating the flash response of a female Photinus. Here a mated female, aptly termed a femme fatale, devours a male Photinus macdermotti. [1]

Photuris males are also deceivers in their own right. These males can mimic at least two other species, a behavioral trait that is a real “bait and switch” tactic. Female Photuris looking for lunch after mating are duped into approaching males of the same species. On the other hand, deceiving Photuris males are looking for an additional mating opportunity. Now this is a risky strategy for Photuris males since they run the risk of being eaten by a female of their own species. So what self-respecting male Photuris would take such a risk? It is possible that deception is a strategy employed by old Photuris males. Geriatric males may employ this suicidal tactic in order to fertilize one additional female, even it means being eaten. By engaging in such suicidal behavior, a male may be helping his last offspring survive.

So why worry about bullfrogs and fireflies? While they both are ambassadors for warm summer nights, both are deceivers as well. Bullfrog males, however, pale in comparison to fireflies, deceivers par excellence. The discovery of such complex behavior in nonhumans is largely of interest to evolutionary biologists and ethologists, but it serves as a reminder that we all engage in behavior that is essentially selfish. Looking from an Olympian perspective, it is easier to see the commonalities we share with other animals and how all living organisms are working to solve the same basic challenges of survival and reproduction. So the next time you hear someone objecting to evolutionary ideas because there is no evidence, just think of fireflies and bullfrogs.

1. Carlson, A.D. and J. Copeland, Behavioral plasticity in the flash communication systems of fireflies: Although insect behavior has generally been considered stereotyped, recent research indicates that fireflies can alter their flash patterns according to the behavioral context. American Scientist, 1978. 66(3): p. 340-346.