Atlanta is closed today.  After the debacle two weeks ago during our three-inch snowfall, officials from the Georgia Governor to the Mayor of Atlanta were skewered by national media.  The criticism was certainly justified, since a coordinated emergency plan was not in place in the lead-up to the storm and even in the early hours after it began.  The effects of a weather emergency on a city the size of Atlanta are impressive.  Traffic on all major arteries leading in and out of the city were at a complete standstill, with most roads blocked by semis jackknifed across multiple lanes of interstate highways.  On secondary roads, a demolition derby unfolded ,with police answering hundreds of accident calls in just a few hours.

Part of the reason for the lack of reaction to the early warnings is the “weather forecaster that cried snow” problem.  Let me be clear, forecasting the weather is not an easy job, nor is it a precise science.  Technological advances in the last few decades have dramatically increased the accuracy and precision of weather forecasting.  Hats off to NASA and the space program for another contribution to society for advanced types of radar that provide us with colorful 3-D images of weather events, as they say in the business.

The rub comes when you combine weather forecasting and economics.  No, I don’t mean the costs of delays in shipments of goods and merchandise, nor salting and plowing roads, nor the long-term degradation of roadways from the weather, or the lost income of workers in the construction and maintenance industries.  I am referring to the battle over advertising dollars by local television stations.  People rely on weather forecasts on commercial radio and television stations and gaining the largest possible viewing audience is the name of the game.  While much of the information is provided by NOAA (National Oceanic and Atmospheric Administration, a scientific agency within the Department of Commerce) free of charge, most television stations have their own technology to augment the NOAA data, and many subscribe to commercial forecasting services (Accuweather, WeatherBug, Weatherblink, etc,).      One of the major equipment mainstays of local television, besides the ubiquitous news helicopter, is Doppler radar.        Doppler radar is the type of radar used by television meteorologists and has become the radar used in meteorology.  Its use in weather forecasting is only a small part of the many applications of Doppler radar.  Simply put, Doppler radar beams electromagnetic energy at a target and then listens for the signal that bounces off the target.  Depending on the properties of the returned signal, it is possible to predict the size, shape and velocity of the target.  Doppler radar is used in aviation, radiology, weapons guidance systems, and the ever-popular police radar guns.

While there are differences in the Doppler weather radar systems used by commercial television stations, the basic principles of operation are all the same.  However, in order to differentiate oneself from the competition, advertising types have spruced up the names of the equipment used.  Rather than simply saying “Doppler radar”, we have Pinpoint Megadoppler 5000, Superdoppler 7000, Stormtracker Plus, Live Mega Doppler 5000 Plus, Live Mega Doppler 7000 HD, SuperCell 9000, Viper 8000, and my personal favorite “Live VIPIR” radar.  In the interest of completeness, VIPIR has nothing to do with snakes, but  is an acronym for “Volumetric Imaging and Processing of Integrated Radar” which sounds significantly less sexy than the other names.  In keeping with the American tradition bigger is better, there is a competition among television stations to have the most powerful, longest range, most sophisticated, and most colorful output in the local market.  No doubt, among Doppler radar manufacturers there is heavy competition to build the biggest and best radar possible with significant financial rewards for the winner. 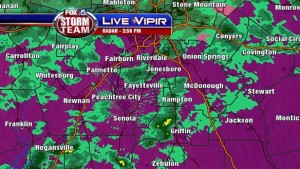 So what does this have to do with Atlanta traffic?  In order to compete in the market, each television station uses all of the promotional techniques available to give the audience the impression that its weather forecast is better than the competition.  Part of that is having a flair for the dramatic and nowhere is “drama queen” more appropriately applied than to some meteorologists.  Warnings of severe, devastating, catastrophic floods, tornados, hurricanes, snowstorms, and even drought are commonplace.  Like the boy who cried wolf, we have become inured to cries that portend catastrophe.  The persistent use of hyperbole desensitizes us to the warnings and at times leads to life-threatening outcomes.

The net result of the competition to have the biggest, fastest, and most accurate weather report means that often the severity of weather events is sensationalized.  It is likely that part of the Atlanta problem in the previous snow event was due to officials minimizing the dangers and severity of the impending storm.  Today, however, the weather forecasters got it mostly right.  Rain, sleet, and a little snow cover the ground and more is predicted.  Thanks to the professionals who try to present the “facts, ma’am, just the facts” as Sgt. Joe Friday of Dragnet fame would say.