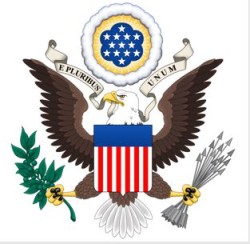 American is exceptional.  That is this view of President Obama as well as politicians on the left and right.  In this post, I argue that America is not exceptional.  Was America ever exceptional?  Yes, but those days have dissolved into the rear view mirror and now we are a country deeply divided along economic, political, educational, and racial lines.

So how did the notion of American exceptionalism arise?  Alexis-Charles-Henri Clérel de Tocqueville (1805-1859) was a French academic who wrote a two-volume treatise on the social and political situation in the US entitled Democracy in America, published in 1835 and 1840. [1, 2]  de Tocqueville wrote, “The position of the Americans is therefore quite exceptional, and it may be believed that no other democratic people will ever be placed in a similar one.” [2, p. 36]

About the same time as de Tocqueville, Jacksonian Democrats (mid 1830s-1854) in the US were lobbying for territorial expansion and were searching for justifications for war with Mexico and for splitting the Oregon territory in half with Great Britain.  The expansionists found their justification in the writings of John L. O’Sullivan (1813-1895), an American journalist and Democratic activist.  O’Sullivan coined the phrase “Manifest Destiny” and defined it as a “divine destiny” for the United States “…to establish on earth the moral dignity and salvation of man.”  O’Sullivan went on to write that the United States would become a “Union of many Republics” all sharing in common values of equality, rights of conscience, and personal enfranchisement.[3]

Simply put, Manifest Destiny held that Americans have special virtues determined by God and it is America’s mission to remake the world in the image of America.  Since the mid-19th century, US presidents have more or less held firmly onto that belief, with some minor exceptions.  By the early part of this century, American exceptionalism was on full display during the George W. Bush presidency.  American exceptionalism meant that the US was above international law and therefore not subject to international sanctions.  As presently used, American exceptionalism is taken to mean that what America does is qualitatively different from the rest of the world and America has a special role to play in world history.

President Obama noted that ” …America has a continued extraordinary role in leading the world towards peace …”[4].  Like his predecessors President Obama embraces the belief that America is different from other nations.

Recently, in the New York Times, Russian President Vladimir Putin wrote in an op-ed that “It is extremely dangerous to encourage people to see themselves as exceptional, whatever the motivation.”[5]  Of course, President Putin’s assessment of American exceptionalism was not greeted with enthusiasm by many, but I want to show why President Putin is correct.

Aaron Sorkin’s The Newsroom  is an American television drama based on daily life at a fictional cable news channel.  The main protagonist, Will McAvoy (played by Jeff Daniels) was asked, “In one sentence or less, can you say why the US is the greatest nation on earth?”  McAvoy replied.. “We’re not…we’re 7th in literacy, 27th in math, 22nd in science, 49th in life expectancy, 178th in infant mortality, third in median household income, number four in labor force and number four in exports. We lead the world in only three categories: number of incarcerated citizens per capita, number of adults who believe angels are real and defense spending…”[6] 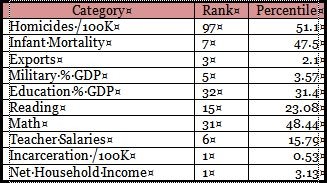 While Will McEvoy’s response is fictional, it prompted me to look at how we rate when compared to other nations in some important areas.  The best comparative data are available from the OECD on a variety of quality of life measures from countries around the world.  It is clear from this table that the US leads the world in only two categories and is woefully behind other developed countries in expenditures on education and student performance in reading and math.[7]

I find it difficult to reconcile the assertions about American exceptionalism with these data indicating that we are falling behind in our educational system.  We are in the top 5% of the countries in the world in our military spending as a percentage of our GDP, but barely in the top third when it comes to our spending on education.  While significant expenditures on education do not guarantee a positive outcome, our lack of success in educating our children in reading and math is extremely troubling.  Everyone talks about the importance of an education, but it appears that we have missed the mark when compared to other developed countries.  In a future post, I will consider what is happening in the US education system and what we might do to improve it.

To continue to assert that we are exceptional is to ignore data to the contrary.  The theory that America has a special place in the order of nations is simply a denial of the facts.  Historically, we have gotten away with asserting our exceptionalism because we could mask our lack of success with our great wealth.  The US could simply overwhelm other nations in the size (bigger is better), quantity (more is better), or scope (wider is better) of our endeavors.  Our battleships were bigger, our jets faster, our economy more robust, our citizens more generous, and our landscape more scenic was the contention.  Today, however, significant worldwide changes have altered the reality of our situation:  the fall of the Soviet Union, the shipment of much of our manufacturing overseas, the rise of China, the insufficient regulation of our financial system, and the decades of war have altered significantly our place among nations of the world.  We are a different nation than we were 50 years ago.

According to many “America is the greatest nation in the history of the world and is a force for good.”[8]  America is following a path chosen by God, an idea arising directly from the Manifest Destiny, is widely accepted.  God is on our side and the US was founded on Christian principles are cries of the extreme right in this country.  In reality, while we may have been exceptional in the past, we are not today, nor were we founded as a Christian nation.

World politics are complicated and often difficult to understand.  Americans frequently hear that issues are too complicated for the average person to comprehend, and so are given a dumbed down, pre-digested, baby version of the facts.  Unfortunately, most Americans are unwilling to expend the effort necessary to form reasonable informed opinions about current political issues and so follow mindlessly along with what they are told by biased voices on the left and right.

As Zbigniew Brzezinski, national security advisor to President Jimmy Carter, said in an interview with Der Spiegel, “[American exceptionalism] is a reaction to the inability of people to understand global complexity or important issues like American energy dependency.  Therefore, they search for simplistic sources of comfort and clarity.  And the people that they are now selecting to be, so to speak, the spokespersons of their anxieties are, in most cases, stunningly ignorant.”  He continued in the same interview …”I am very worried that most Americans are close to total ignorance about the world. They are ignorant. That is an unhealthy condition in a country in which foreign policy has to be endorsed by the people if it is to be pursued. And it makes it much more difficult for any president to pursue an intelligent policy that does justice to the complexity of the world.”[9]

One in three Americans is unable to name any of the three branches of government. Forty-two percent do not know when America declared independence; and 24 percent do not know from which country it gained independence.[10]  America has an abundance of very smart people, but the ignorance found in certain segments of society is breathtaking.  Without an educated and informed citizenry, America will continue on its downward spiral toward mediocrity.

While virtually every politician speaks about the importance of education, the US is plagued with ill-informed and ignorant citizens who have been sold a bill of goods about the tyrannical rule of the Obama administration.  We are told that the Affordable Healthcare Act will result in premium increases for all participants, the Common Core Curriculum for schools will result in reduced academic achievement, charter schools are the answer to all educational ills, and that we can kill our way to national security.  These ideas are go unchallenged by far too many.  From death panels to the nonexistence or naturalness of global warming, American citizens are fed a continuous diet of lies and at best half-truths.

I wish I could end on a hopeful note, but so long as we elect poorly informed, low intelligence, ethically bankrupt, religious zealots to public office, Americans are getting just what we voted for.