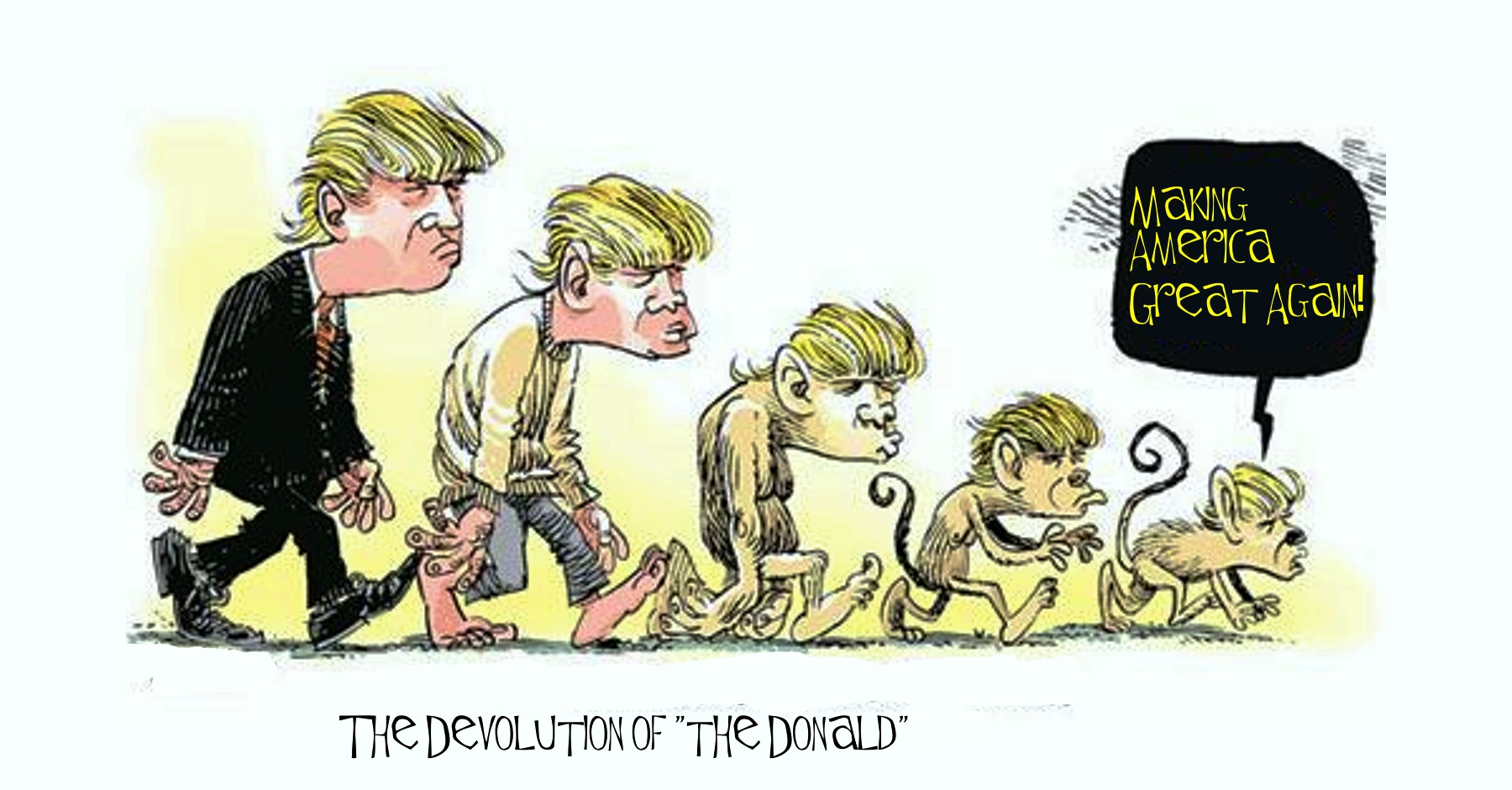 I never, in my wildest dreams, thought he could get this far.  I have done my best not to listen to any of the televised debates, but have relied on sound bites and gotcha’ moments for their entertainment value, not information.  The Presidential debates are nothing more high stakes reality TV.  America wants a show, not information.  “The Donald” has given us just that, a public spectacle that looks like the WWF, roller derby, and the Miss USA pageant rolled into one.  With any luck we can look forward to nine more months of thrill-packed excitement as Trump continues to dominate the media.

I have wondered what a Trump Presidency would look like, and am terrified of the prospects.  “The Donald” has said he will exclude immigrants based on religion, pressure Mexico to build a wall along its northern border, impose nearly 50% import duties on Chinese manufactured goods, increase the use of torture to thwart terrorism, court Vladimir Putin, and demand that Japan pay protection money.  But would any of this rhetoric actually come true?  Even if Trump wins, likely very little, but what if?

“The Donald” continues to amaze and amuse me.  How could he have gotten this far in his run for the Presidency?  I have thought for months that he will take out a television ad confessing that his campaign was just a joke and touting that his success demonstrates he could sell refrigerators to… well you know.  After Super Tuesday and the subsequent debate, “The Donald” appears unlikely to drop out of the race, as his numbers continue to cause seismic shocks in the GOP.  My hopes for the ad are growing dim.

From my lofty curmudgeonly perch, it is easy to make pronouncements about the future as I may not live to see many more Presidents elected, so here goes.  For the sake of the old US of A, we need a revolution, like the one that teased us in the ‘60s.  It is clear to me that should we elect Bernie Sanders, Hillary, Bill and Chelsea Clinton, Marco Rubio, or Ted Cruz life will go on in Washington just as it has for generations.  There will be cosmetic brush-ups and superficial changes, but real reform will not occur.  Washington will continue to be run by corporate interests and Wall Street.  The gap between rich and poor will continue to grow, social “safety nets” will have increasingly large holes, our ongoing war in the Middle East will continue, although it will never be declared.  Nothing of significance will change.

A victory by “The Donald” is our only hope for real change.  However, for real change to occur, America will have to go through a crisis reminiscent of the 1930s Depression.  For the sake of the 99% this is why I hope that “The Donald” is not elected President.  On the other hand, for real change to occur I fear we all must experience an economic, social and foreign relations Armageddon.  Trump will likely get the US involved in a declared war in the Middle East, not like we are now, but one with a draft.  Under his direction we may be lucky enough to see a nuclear device detonated in South Korea and appropriate US-backed military response making Pyongyang look like a parking lot.  We need more useless killing of American soldiers, $10 a gallon gas, the collapse of public education, and the further erosion of our infrastructure until we are indistinguishable from your garden variety corrupt Third World country.  The top 1% will continue to do just fine, but the rest of us will experience an unprecedented downturn in our standard of living, not seen since the Great Depression.

True change is possible only when the average, lazy, self-centered, uncritical, and under educated American gets sick of the smell of the US and wants to do something about it.  Until then, the average American will come home from work, toss back a few beers, eat a frozen dinner, and watch brain-numbing reality television.  Until our social and political policies hurt the majority of citizens, all we will do is whine.  All the self-serving recycling efforts, low-flow toilets, electric cars, alternative energy, and natural food marketing to the contrary.  Most people don’t really care what happens in the US or the world unless it directly effects them.  That there is a war in the Middle East, or that North Korea has just launched a nuclear attack against South Korea, or that there is horrific environmental change brought on by global warming, or that women continue to be subjugated to second-class citizenship in most countries throughout the world, will likely evoke only an “Ain’t that too bad” response.

In my humble opinion, the only hope for the US is for “The Donald” to be elected President and the US to continue its slide toward third world status.  Then, and only then, will Americans get off their collective asses and demand substantive change.  Sadly, a victory for Hillary Clinton, or my personal favorite, Bernie Sanders, will not bring radical reform, just more of the same.  Today government reminds me of Jabba the Hut of Star Wars fame.  It is so big and bloated that it must continually recruit legions of servants just to keep it fed, nominally mobile, semi-awake, with minty-fresh breath.  I just don’t see government changing unless there is a catastrophe.

I have long been a fan of George Carlin and consider him one of the keenest observers of human behavior in modern times, as well as the wisest of human sages.  He summed up much of what I feel about this country and humans in general, in the following words.

Let’s hope that my lack of faith not just in Americans, but our species as a whole is totally misplaced. … Human beings were given great gifts. We were given the ability to reason, a large brain, erect bipedalism, spoken language, and opposable thumbs.  With all of these things we had such promise, but we squandered it on goods and superstition. We gave ourselves over to the high priests and the traders, and allow them to control us. … America was given great gifts, not the least being the most improved form of self-government that ever existed, and we squandered it…on the same two things: gizmos and toys and gadgets — goods, property, possessions — we became satisfied with lights on our tennis shoes.