On December 20th, five action-packed, thrill-a-minute excitement college football games were played, and you probably missed it. Believe it or not, the 2014 New Orleans, Las Vegas, New Mexico, Famous Idaho Potato, and Camellia Bowls are all history. But wait! There’s more, in fact, over thirty more are to come, but who cares? Save for the families of the players, a few die-hard supporters, the local chambers of commerce, and network television, almost no one else. No one cares because the teams that are playing in almost two thirds of the bowl games are mediocre at best, and while the individual games might be entertaining, they are certainly not worthy of a “national” television appearance. The college football playoffs are the only ones that generate a significant viewing audience, and with that a big payoff.

For the less well-endowed athletically, participation in a bowl is generally viewed as a good thing, providing a national venue on which to display their limited prowess. Mediocrity is the hallmark of many of the bowl games in which participating teams have a meager 50% winning record. The average winning percentage across all participants in bowl games this year is approximately 67%. Such a record of performance is not special, but what one would simply call a “good year.” To add insult to injury, the average attendance of the first five “bowl” games played this season is 26,857, or about two-thirds of stadium capacity.

Why Are There So Many? 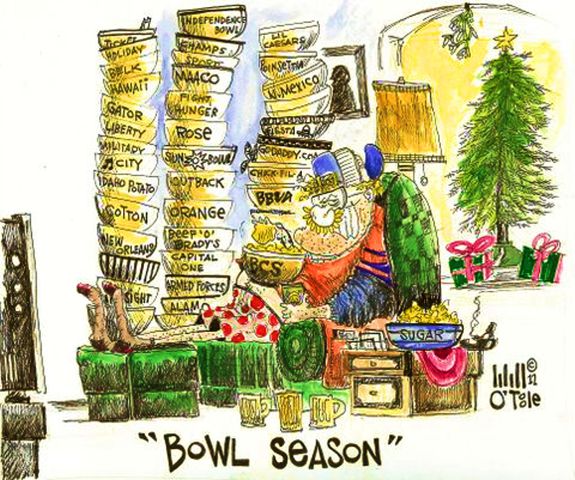 Bowl games exist, for the most part, as advertising venues for the sponsors and revenue-generating opportunities for television networks (ESPN owns 11 bowl games) and host-city chambers of commerce. There seems to be a never ending thirst by chambers of commerce and local tourism industries to host a bowl game, hence they are spreading like an STD. Proposed bowl games include the Cure Bowl in Orlando in 2015,

the Christmas Bowl in Los Angeles, the Dubai Bowl in UAE, the Ireland Bowl in Ireland, the Little Rock Bowl, in Arkansas, and the Toronto Bowl, in Ontario, Canada.  The number of schools with football teams in not expanding, so as the demand for bowl games increases, quality of play decreases.

Don’t get me wrong, there is absolutely nothing wrong with a school not having a national championship caliber football team. Contrary to popular belief, there are colleges and universities that have not invested in their athletic programs. In fact, the University of Alabama at Birmingham has decided to eliminate its football program entirely.[1] Thirty one NCAA Division 1 institutions have never hosted a football program, and 69 out of nearly 340 schools in Division 1 have discontinued their programs.

Costs and Benefits of Bowling 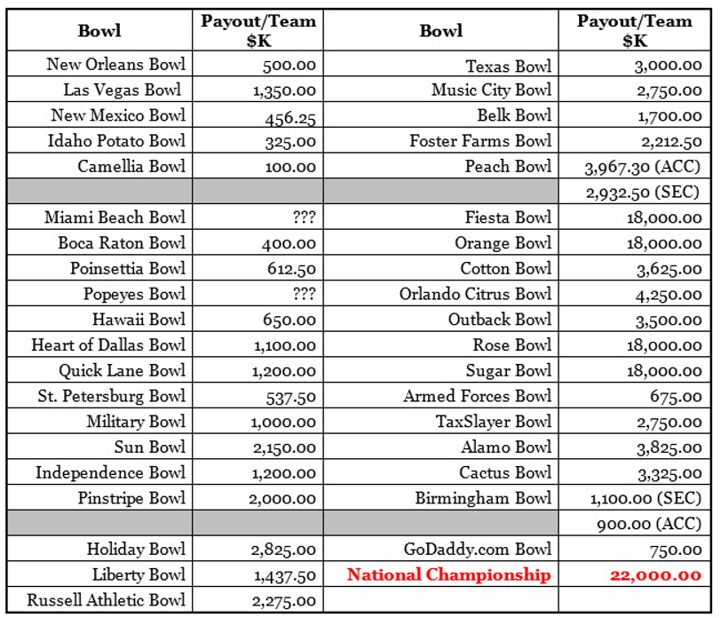 Winning a prestigious bowl game can make the difference on a personal level for coaches and their staff in having a job or not, or in some cases having a house for life. Financial incentives to coaches and staff are often provided by nonprofit foundations that support the activities of university athletic departments. Winning means bonuses and other perks for head coaches as well as staff. In the case of University of Alabama head coach, Nick Saban, the Crimson Tide Foundation paid off the $3,1M loan on his 8000+ square foot home. Saban bought the home in 2007 for $2.85M, so in addition to a free home, he made about a quarter million in pocket change. Saban’s 2014 monthly salary is $542,050.07, plus $400K bonus per year not to sign with another school, as well another $700K per year in other performance bonuses. [4-8]

But participation in the games is a costly endeavor and for many of the bottom tier bowls, the team payout does not coverthe cost of airfare, meals, and lodging for the two hundred or so team and athletic staff members attending. For example, participation in the 2011 Orange Bowl left Virginia Tech the recipient of a 40-12 loss to Stanford, as well a loss of $421,046. The cost to play in the Orange Bowl outstripped the amount of bowl money the team received. Virginia Tech is a state institution and, like other public institutions, the athletic program receives millions in tax dollars. It would have lost even more money had the Atlantic Coast Conference, to which Virginia Tech belongs, not spent nearly $1.2 million to help to make up the deficit. For the 2010-11 bowls, participating schools lost on-average $346,959, reflecting an average expense allowance of about $2.38 million and an average expense of $2.73 million. [2]

Interestingly, more bowl games mean more money to all teams in the football conferences of the combatants. Yes, all the members of the conferences to which the teams belong enjoy financial benefit when one of its teams plays in a bowl game. Therefore, athletic conferences also apply pressure to participate and get in on the largess of bowl participation. Given this environment, it actually makes more sense for a school not invited to a top tier bowl game to decline the invitation. They would actually benefit from another school’s participation without incurring any of the costs associated with playing the game.

Thus participation in a bowl game is said to generate exposure, funding, enrollment, etc. for the participating schools. In reality, very little of that happens according to David Ridpath, an associate professor of sports administration at Ohio University, in an interview in the New York Times[3]. It is only the teams that participate in the big boy bowls that find the pot of gold at the end of the rainbow.

If the greed of institutions, chambers of commerce, and television networks are not enough, the greed of the bowl organizers is breathtaking. Their quest to squeeze every dollar from fans and participating schools has led to a system in which universities are nothing more than a source of financial support for local hospitality industries. One of the onerous tactics employed by bowl organizers is charging institutions full price for all institution-affiliated personnel attending the game. The president, board of trustees, athletic department, and even the band, all buy full price tickets even when considerably cheaper ones are available on the secondary market. Schools are obligated to purchase hundreds of hotel rooms at choice locations for prolonged stays, all determined by the bowl game organizers. To add insult to injury, local taxes on hotel rooms generate a commission for some bowl organizers as a kickback for choosing particular venues. Needless to say, this is a far cry from the image presented to national television audiences.

Bowl games are lavish events and the levels of greed were recently exposed in legal proceedings against John Junker, the past CEO of the Fiesta Bowl. In one of the most egregious examples of profligacy, the Fiesta Bowl, technically a non-profit organization, was exceedingly generous in its compensation of staff and to Junker, in particular. Junker belonged to four private golf clubs in three different states courtesy of the Fiesta Bowl and enjoyed a non-salaried expense allowance of approximately $1,300 per day for a period of approximately 10 years. In addition, the Fiesta Bowl provided $95,000 for a round of golf with Jack Nicklaus; $33,000 for Junker’s 50th birthday gala in Pebble Beach, CA; $65,000 to fly state legislators and their families to a Boston College-Virginia Tech game in 2008; $13,000 for airfare and other considerations for the wedding of his executive assistant; and $1,241 for a visit to Bourbon Street Circus, a high-end Phoenix strip club. John Junker purchased 36 floral arrangements for a total of $2,565.03 from a company owned by an executive for the Fox network, which just happens to broadcast the Fiesta Bowl [9-11].

Who Pays the Bill?

Of course, the fans who attend the games pay a hefty price for a seat.  For example, a ticket for the upcoming Rose Bowl game cost on average almost $700 (range $185-$125K) from an online ticket site.  In addition, tax-supported public universities must pick up the tab for the losses incurred for participation in a bowl game. This is especially irksome since the bowls are run by tax-exempt, non-profit groups that have increased their own bank balances at the expense of the students at participating schools and the taxpayers. As discussed earlier, income from television takes care of the cost of doing business for the top tier schools. But for others, taxpayers and students have to pick up the bill. For example, Middle Athletic Conference (MAC)[ii] students spent, on-average, more than $300 per semester subsidizing athletics. During a time of mounting student debt, that is nearly $2,500 over four years.[1]

Prospects for the Future

Like so many, I was a fan of college football for years, but the sport has evolved into something that has little to do with athletic excellence and the honor and glory of winning.  Players now are recruited earlier, idolized more, and less well-educated than anyone would like to admit. Players are often treated like royalty and special programs are developed that allow them the time necessary to perfect their athletic abilities unencumbered by the necessity of attending classes.

Rather than admitting the hypocrisy of the system and creating semi-professional teams, loosely associated with universities, the NCAA continues to perpetuate the myth of the student/athlete. Sure we hear of the Academic All-American in his 5 year, majoring in sports marketing with a B+ average. But can this really be considered a real college major with real classes, papers, and exams? I have serious doubts. Unfortunately, many college athletes, particularly in the money sports, are not typically interested in the education they might receive at a potential school, but what kind of deal can they get. What are the dorms like? What is the training table food like? How big is the stadium? And most importantly, what can you do for me?

Because of their income potential, athletic programs have far too much influence on decisions that affect the entire university. There is something fundamentally wrong with a system that pays a football coach more in a month than a university president makes in a year. Universities collect fees from students to support campus programs, but too often the bulk of the money goes straight to supporting the two money-making sports, basketball and football.

Compensation for coaches is based largely on their performance on the field. The won/los record is the final arbiter in most cases. Once winning became the only currency of success, the metrics of compensation in the business community became appropriate and accepted. . The effects of such gross compensation disparities send powerful messages to students, faculty and staff. For university employees the impact on morale is obvious. The average undergraduate is, by nature, clueless.

Sadly, in spite of the flagrant abuses of the bowl system and college football in general, there is little hope for reform. Fans vote with their feet, and as long as the cult of college football continues, fans will continue to pick up the check for outrageous programs. Coaches will be paid like CEOs of major corporations. Players will get preferential treatment in the classroom as well as with local law enforcement. Athletic non-profit foundations will continue to game the system, and the band plays on. 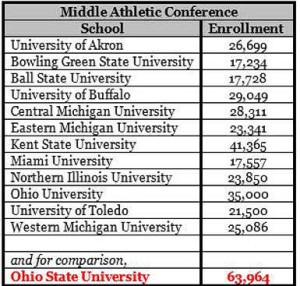