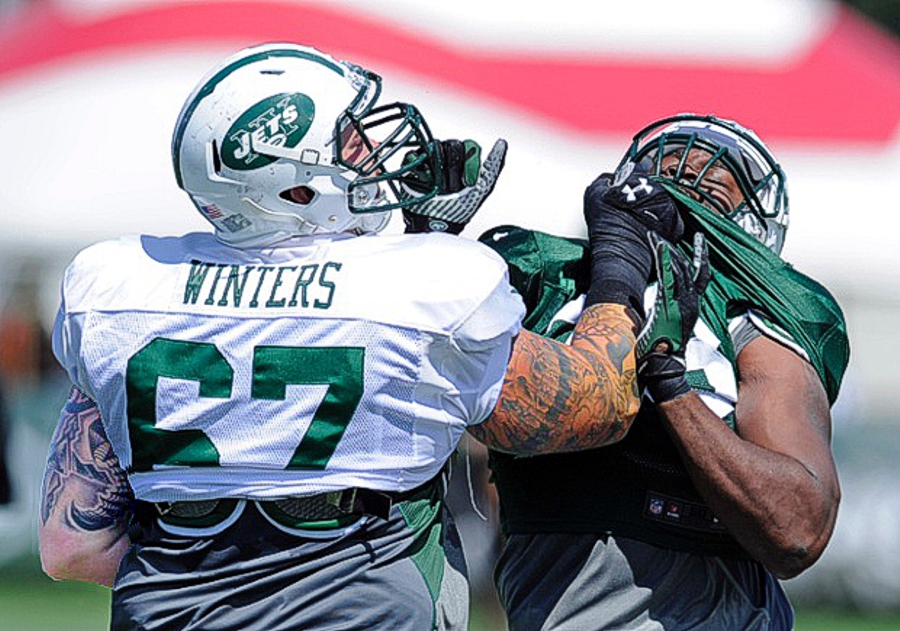 It’s that time of year and we are being carpet-bombed with Super Bowl ads and teasers.  Millions of fans worldwide will be glued to their television sets on Sunday evening at 11:30 PM in London, 4:30 AM Monday in Kabul, Afghanistan, 7:30 AM Monday in Hong Kong, and 1:30 PM Sunday afternoon in Honolulu.

To add to the suspense, we have endured Deflategate and Ballghazi.  Scandals notwithstanding, betting on Super Bowl XLIX is up to usual standards with wagers being placed on the coin toss, if Marshawn Lynch will make an obscene gesture after making a touchdown, the color of Bill Belichick’s hoodie, not to mention the outcome of the game.

Sports pundits will analyze the rosters, injuries, diet, equipment, past games, play calling tendencies, as well as the coach’s astrological sign to come up with a prediction.  Sports bookies will be doing the same, as will sports fans everywhere.  Such websites as numberFire.com have sophisticated metrics that take into account every possible situation on a football field and assign each situation an expected point value.  Today the pick is Seattle by a field goal or less, but of course, that will change many times before kickoff. 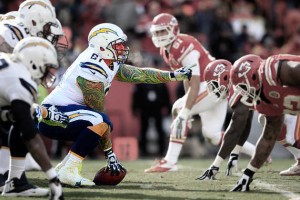 Since I have neither the patience nor expertise for the metrics used by the real prognosticators, I have relied on an anthropological approach.  Yes, I have made my prediction based on a sophisticated, painstaking analysis of the body decoration of the Patriots and Seahawks players. 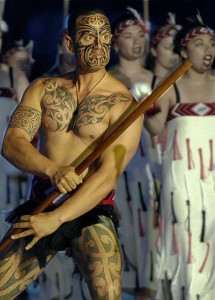 Among the Māori of New Zealand, Tā moko is tattooing at its best.

Body decoration has long been an interest of anthropologists and is employed by cultures around the world.  The oldest known tattoo was found on a well-preserved mummy who lived around 3300BCE.  He was found in the Ötztal Alps on the border between Austria and Italy, and had tattoos on his back, behind his right knee, and on his ankles. In Japan, the Ainu, the indigenous people that inhabit the northernmost prefecture, Hokkaido, have been tattooed for centuries.  Irezumi, as it is called, has waxed and waned in popularity in Japan, but today is embraced mostly by the young.  Tattooing has a long history in the Marquesas Islands, and while its origin is unclear, tattoos are found on both males and females.  For males, it is part of a rite of passage and they are tattooed more extensively than females.  For females, hands, ears, and lips are the most popular body parts for tattooing.  Among the Dayak of Borneo, the transition to manhood is marked by ritual tattooing.  Also among the Dayak, the taking of an enemy head was marked by tattoos on the fingers of the warriors.  Among the Māori people of New Zealand, Tā moko, tattooing was a mark of high status and a cultural marker of the transition between child and adulthood.  Tā moko was the quintessential body decoration to make oneself more attractive to the opposite sex.  Both men and women are decorated, but males typically have more decoration.  Pe’a is the traditional male tattoo found in Samoa.  Males that have undergone the extensive and very painful procedure are respected for their courage.

Tattoos and the NFL

As in other sports, tattoos have become de rigueur in football.  For American football players, the uniform places considerable constraints on the visible skin available for decoration, unlike for basketball and soccer players.  The entire uniform is designed not only to protect the wearer, but to be intimidating.  Shoulder pads, skin tight pants, and helmets all contribute to the intimidation factor.  As an anthropologist, I would argue that tattoos are also a part of the uniform for many.  Tattoos are a conspicuous form of nonverbal communication.  Not only does the content of the tattoo matter, its size and color also matter.  Given the physical size of many football players, there is plenty of space for even the most elaborate artwork. 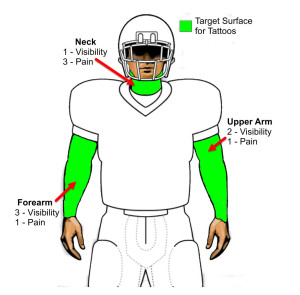 While the underlying symbolism for many tattoos is deeply personal, for others the meaning is loud and clear.  Images of wild animals, dragons, and mythical creatures abound, but the standard of toughness seems to be a variant of a strand of barbed wire encircling the upper arm.

Tattoos are not confined to players at one position, nor are they confined to offensive or defensive players, but if the symbolic significance of tattoos communicates anything about ferocity and aggression, then it follows that the team with the most tattoos wins.  In conducting this ground-breaking research, I must disclose that I was not able to count accurately the number of tattoos individual players exhibited, so I resorted to classifying the tattoos by location – upper arm, forearm, and neck are the potentially available sites.  Classifying on visibility alone, I ranked forearms as most visible and necks as least visible. It is well known that tattoos are not painless, and for some, the pain of getting a tattoo is part of the experience.  Certainly, before the advent of electric needles, sharpened combs were often used to etch ink into the skin, a particularly painful enterprise.  Today, it is well known among tattoo artists that certain areas of the body are more sensitive than others.  The upper arm and forearm tend to be  favored spots because of the deposition of adipose tissue beneath the skin.  Any area that is not covered by a padding of fatty tissue is a painful site for tattooing.  Hence, I scored the sites for tattoos on pain potential, with tattooing on the neck being significantly more likely to be painful than the arms.

The results of my analysis are summarized in Table 1.  By assigning a visibility score and a pain score to each tattoo by where it on a player’s body, I was able to calculate a composite tattoo score (CTS).  Based on the Total CTS, I predict that the New England Patriots  will win Superbowl XILX. 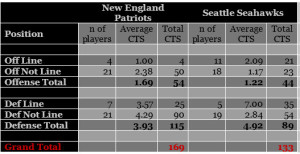 There are some interesting and unexpected trends revealed in the data.  First, I hypothesized that the offensive line (OL) would be more heavily-tattooed than players in other offensive positions.  Not only was this not true for both teams, the offensive line was the least tattooed position of all.  The defense of both teams was more heavily-tattooed than the offense.  For the Patriots defensive, players other than the linemen were most heavily-tattooed, while for Seattle it was the defensive line (DL).  These results indicate that for these two teams, tattoos are more often found on defensive players.  These results offer an interesting hypothesis for future research.  Additionally, future research should consider the number of individual tattoos, as well as an analysis of their content.

Of course, professionals will expend considerable energy in their analyses of all the possible variables that can affect the outcome of the game.  Interestingly, my analysis of tattoos has not been considered previously, but is obviously superior to such factors as injuries, physical conditioning, athletic ability, etc. for it is a true symbolic analysis. So much of American football is symbolic.

In addition to individual tattoos, team names, logos, mascots, and scantily clad cheerleaders, the winners of the Superbowl get a gaudy, oversized ring that would only be suitable for a Middle Eastern potentate, or perhaps Vladimir Putin.  Given the prominent symbols of power and prestige and ability to withstand injury and pain, it only makes sense to use tattoos as a predictor of which team can ‘man up’, get some ink, and win the Superbowl.