I never really understood Christmas trees.  I know the long history of having a decorated tree prominently displayed inside a home at Christmas time.  For many, the Christmas tree is a powerful symbol of a season that evokes pleasant feelings, images of sugar plums, and a red nosed reindeer.  I am sure that for most, Christmas is a time to enjoy family and friends, to reflect on the year gone by, and celebrate the possibilities of the New Year.

My mother complained about having a real tree during the entire time it was up.  Getting it inside was a pain.  Getting it to stand up in one of those flimsy tree stands was always a feat.  Inevitably, gravity would take over and the fully decorated tree would list at a 15° angle.  The lights were always a challenge.  Lights were wired in series so if one light in the string went out, all of the lights went out.  To determine the offending bulb, each bulb must be removed and replaced with a working bulb.  And then there was the tangled mess that was the strings of lights.  Clearly, there was a light gnome that lived in the box with all the Christmas decorations and was tasked with winding up the lights into a tangled mass that could take hours to untangle. 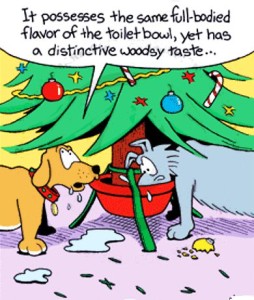 Once the lights were on it was time to hang the ornaments.  Also in the gnome’s job description was collecting all the little wire hooks used to attached the ornaments to the tree and wadding them up into a pile in the bottom of the box.  Finally came the silver tinsel.  I was never sure what the tinsel was supposed to represent.  It looked like thin strips of flimsy aluminum foil to me.

And so the Christmas tree was decorated.  And what was the first thing that had to be done?  Sweeping up all the pine needles that had fallen off the tree during the decoration phase.  And so it went.  Sweeping up tree debris and putting water into the base of the tree holder, only to find it leaked .  It didn’t take long for my mother to give up on a live/recently deceased tree and opt for a fake one. 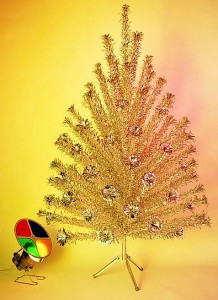 Our house was small, and was oddly designed.  We did not have a dining room, but there was a separate, largely unused living room.  It was filled with uncomfortable odd pieces of furniture and a horrible bright green rug.  Anyway, that was the site for the Christmas tree.  Most people would have put the tree in the den/breakfast nook/kitchen, but not my mother.  She maintained that it got in the way and always made a mess.  As I think back on her objections, it sounds like a small child, rather than a Christmas tree.

The following Christmas brought a new tree.  My mother went with the prevailing trend and purchased a shiny fake tree, complete with floodlight and rotating color wheel.  Aluminum Christmas trees were all the rage through my middle and high school years.  Looking back on it, I continue to be amazed that such a bizarre decoration could achieve such widespread popularity.  Of course, the popularity of the aluminum tree meant the demise, albeit temporarily, of strings of colored lights.  Urban legend has it that an aluminum tree was decorated with strings of lights.  One of the strings shorted out and created the tree of death.

The essential accessory for the aluminum tree was the color wheel.  This was a floodlight with a slowly rotating disk of translucent plastic usually with three or panels of differently colored translucent plastic.  If that was not enough, super deluxe trees could be had that were on rotating pedestals to further enhance the glitz and glitter.  To top off the display, some added mirrored bases and music boxes playing Christmas carols.

Charles Schultz is to blame for the demise of the aluminum tree.  His cartoon of Charlie Brown looking forlornly at the little scraggly tree with one ornament on it caught the attention of many people.  So many in fact, that within two years of the first airing of the television special, the sales of aluminum trees had dropped to near zero.  Actually, the demise of the aluminum trees was a blessing.  They were hideous creations of a culture that was stumbling its way into the mid 20th century.  Good riddance.