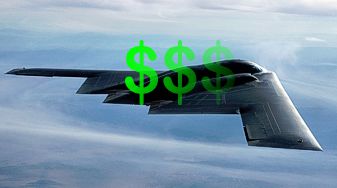 Given the quickly changing “goals” of military intervention in Syria, it is important to determine the likely beneficiary from such action.  Initially, the President wanted to send a message to the Syrian regime about the cost of using chemical weapons.  Targeted, limited, and proportional strikes were the strategy of choice to punish the Assad regime for the violation of the near universal ban on weapons of mass destruction.  One of the purported benefits of such a plan was to discourage North Korea from using chemical weapons and to demonstrate our resolve to Iran and Hezbollah.

When the humanitarian justification failed to get traction, the Obama administration shifted toward a plan to degrade Syrian military assets.  Now it appears that the US intends to use not only sea-based Tomahawk missiles, but B-52 bombers carrying cruise missiles, B-1 bombers based in Qatar carrying long-range air-to-surface missiles, and B-2 stealth bombers based at Whitman Air Force Base about 70 miles southeast of Kansas City, Missouri.  In addition to their stealth capabilities, B-1 bombers are capable of delivering two guided 30,000-pound bunker buster bombs (Big BLU in military parlance) capable of penetrating 200 feet into the earth.  The magnitude of the proposed military strike seems to have exceeded a limited strike and we are now ready for war.

In a previous post, I discussed the costs of the limited and proportional strike originally proposed, but now the potential costs have escalated significantly.  Who benefits directly from military intervention in Syria?

In an attempt to answer that question, I analyzed the stock prices of three major defense contractors (Lockheed, Northrup Grumman, and Raytheon) and compared their stock prices to the Dow Jones Industrial Average since the beginning of the summer.  It is clear from this graph that even the prospect of war increases profits of US companies. 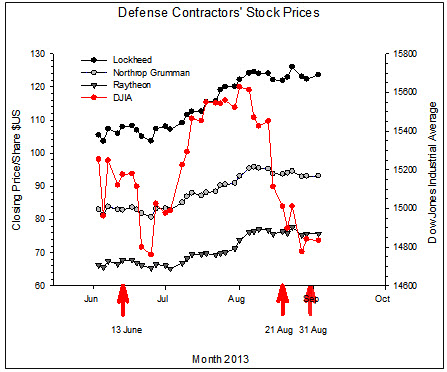 The three dates indicated with red arrows are respectively:

These three contractors manufacture most of the aircraft, missiles, and bombs that can be used in an attack on Syria.  As George Orwell said, “War against a foreign country only happens when the moneyed classes think they are going to profit from it.”  Unfortunately, Orwell’s observation has been born out in too many wars in recent history.

Let us be clear, President Obama has not offered a compelling justification for intervention in Syria, in spite of the public relations blitz from the White House.  The red line argument has been abandoned and now the national security interests justification has floated to the top as the primary basis for intervention.  What those interests include has not been specified precisely but they are obvious.  It is about the money, not just the weapons of war, but also the flow of oil.

From an economic point of view, keeping Syria in check is a primary concern.  The Middle East is volatile enough without having an escalating civil war in Syria.  It is vitally important, not only for the economic well-being of defense contractors, but also for keeping the supply of crude oil flowing through the Suez Canal.  Political stability in the Middle East is essential to the US economy.  So long as we are a nation built on nonrenewable energy this will continue to be the case.

War is not about humanitarian issues, it is about the money.  Remember Iraq and the images of burning oils wells, but also remember our inaction in the Sudan and Rwanda and the wanton slaughter of innocents.  The US is willing to engage in war for economic interests, but has no appetite for war for strictly humanitarian reasons.