Typhoon Haiyan made landfall in the Eastern Samar province of the Philippines, on the southern tip of Samar Island on November 7, 2013.  When the storm departed, thousands of people were dead, millions displaced, and there was massive property damage.  News about this natural disaster was everywhere.  Aid organizations quickly sprang into action, and urgent pleas went out for humanitarian assistance.

Many people respond to such calls, but why?  Why are some disasters more newsworthy than others?  What role do the media play in the allocation of international aid and is it fair to all?  Are we being duped?

The call for assistance went out within hours after Typhoon Haiyan made landfall.  Within a day, aid agencies had pictures of the destruction, featuring children holding placards on which were written the word “Help”.  Within a day, we were bombarded with ads from major donor agencies seeking contributions to the relief effort.  We were told to text “I’ll help” to the number on our television screens to donate $10 to the charity paying for this ad to help in the relief efforts for the victims of disaster de jour, or in this case Haiyan.

When presented with this type of appeal, Americans are extraordinarily generous and equally gullible.  By now, two weeks have passed since Haiyan hit the Philippines, all the major aid agencies are in full fundraising mode, many trying to administer aid as well as secure donations.  Millions of dollars have been pledged by many governments and countless small donations have been made by individuals to help the needy Filipinos.

Haiyan was a major weather event, and produced massive loss of property and life, but is the loss of life comparable to other natural disasters of the recent past?  The total number of fatalities from Haiyan will be in the thousands, but it is unlikely to exceed levels of mortality inflicted by other dramatic natural disasters.  In Table 1 I have listed the major hurricanes/cyclones, tsunamis and earthquakes (> 1,000 deaths) that have occurred since 2000. 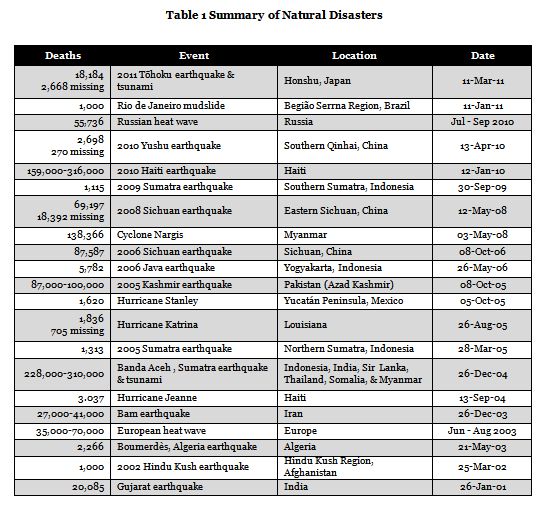 The striking thing about Table 1 is that some of less well-known events had far greater mortality than some of the most widely covered events.  For example, much was written about Hurricane Katrina, but the number killed pales in comparison to the earthquake in Pakistan in 2005 or the Bam earthquake in Iran in 2003.  In fact, one of the most conspicuous gaps in public knowledge about disasters is the complete ignorance of an equally deadly hurricane, Hurricane Stanley, which devastated Guatemala and the Yucatán Peninsula only two months after Katrina. 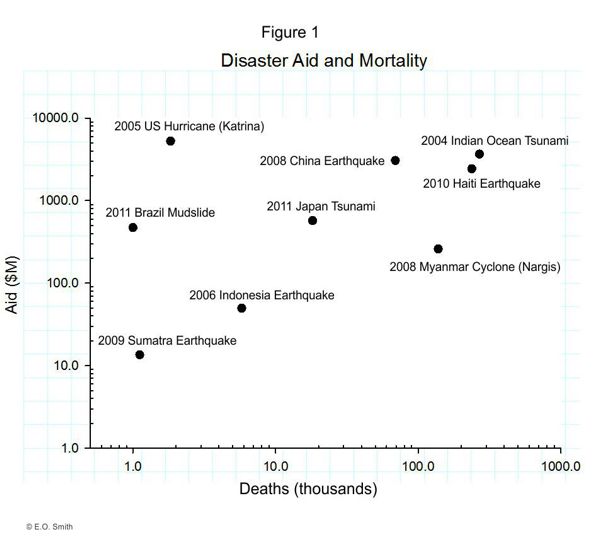 My lack of knowledge of some of these awful natural disasters led me to wonder if the amount of aid given was related to the number of fatalities.  Logically, you might think that the most devastating disasters in terms of loss of life should accrue the most aid.  In Figure 1, I have plotted the amount of aid directed toward each of nine disasters for which there are good data on financial aid, as well as on the number of fatalities.  The striking thing about this graph is that there is no significant statistical relationship between the two variables.  As a note of caution, the data on aid that I was able to glean from the published literature are difficult to interpret.  I used data for monetary donations but have not included goods and services. The value of goods and services is typically overestimated and is an unreliable measure.  Many countries use loan forgiveness as a way of aiding disaster victims, but this too was not used in my analysis.  Where a range of the numbers of fatalities was reported in the literature, I used the mean.  If you compare Figure 1 with Table 1, you find that there are events listed in Table 1 not included in Figure 1.  The direct financial aid in those instances was not available or too small to be reported.

Given the lack of a relationship between amount of direct financial aid and mortality, what factors could channel aid in this non-intuitive way?  Well, the most obvious is media coverage.  If people know about a natural disaster, they are of course more likely to want to help.  Many of the events described and discussed here were rarely or never reported in the mainstream media in the U.S.

Therefore, the media play an extraordinary role in informing the public about these natural disasters, but also directing aid in particular ways.  Consider the Sumatran earthquake and tsunami in December 2004.  The tsunami inundated coastal communities and claiming nearly 300,000 lives in Indonesia, Sri Lanka, India, Thailand, Somalia, Myanmar, the Maldives, Malaysia, Tanzania, Seychelles, Bangladesh, South Africa, Yemen, and Kenya.  To put that number in perspective the population of Pittsburgh, PA was slightly over 300,000 in the most recent census.

Media coverage of the event was extraordinary.  CNN, for example, instituted 24-hour coverage of the relief efforts and deployed over 80 news anchors, correspondents, and producers, along with technical personnel to the affected areas.  The tsunami made the front page of newspapers around the world, including the New York Times, and was the cover story for Time and Newsweek.  Can we attribute the intense coverage of the Banda Aceh tsunami to anything other than its magnitude?  Skeptics might say that it was the last week of 2004 and was a slow time for news so there was little competition.  An even more cynical view suggests that the number of Westerners killed in the disaster was significant; possibly increasing the attention it received.  In recent years Banda Aceh and surrounding areas have become particularly attractive as exotic vacations spots for wealthy Americans and Europeans.

There is an assumption in the international aid community that media exposure and levels of private giving are highly correlated.  This relationship is supported by research [1-3] that found increased media exposure in terms of both television airtime and words in print media increased giving.  In the most detailed study to date [3] the relationship between the amount of time devoted to the Banda Aceh tsunami on the three major networks in the US during their respective evening news  broadcasts  had a direct connection to the amount of money donated online to five major charities in real-time..  In fact, one additional minute of airtime on a network’s evening news increased donations by 20.8% ($47,092) of the daily total.  An additional single word, not story, about the tsunami in major US newspapers increased donations by 0.029% ($59.05).  These are important findings for they show that both television and print media can have a significant impact on private giving.  Going a bit further, it appears that more television time produces disproportionately large dividends for the charities than does print media.  Of course this is understandable since most people rely on television for their news of current events.

It is easy to see that with such television coverage, charities are in head-to-head competition for limited donor dollars.  Aid organizations want to appear as if they are actually doing something to benefit those affected.  Consequently, branding becomes significant, for nobody wants to give to an ineffective agency.  Brightly colored tents, tee shirts, boxes of supplies, and vehicles all carry large logos of the donor agencies.  It has been argued that the appearance of doing something is actually more important than deeds themselves.  Charities need to give the impression to potential donors that they are actively doing something that matters, not simply standing by supervising, no matter what the reality. 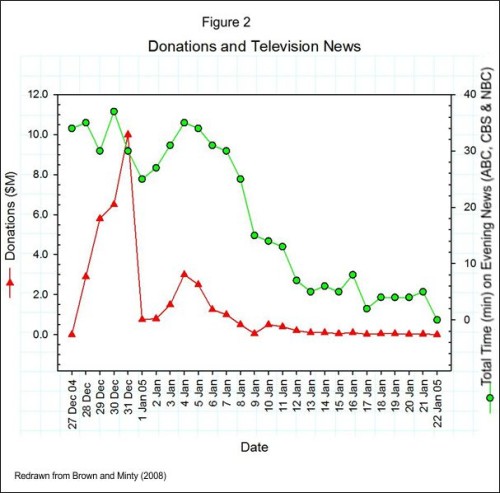 Another interesting finding of the study demonstrates a lag time of only a day between an increase in television airtime and increased giving.  This suggests quite strongly that the “feel good moment” for contributions is fleeting indeed.  See Figure 2.   In addition, it is easy to see that television resources are mirrored in contributions.  After the first week, there is precipitous drop in airtime as well as donations.  Many ascribe this to donor fatigue and people are bombarded with an endless stream of requests for aid.

Nonetheless, US charities received approximately $1.6B in private donations for tsunami relief. [4]  Clearly, media attention played a significant role in such largesse, but what other factors might have influenced this level of giving?  The US government passed the Indian Ocean Tsunami Relief Act on 6 January 2005 allowing US taxpayers an extension of the deadline for charitable contributions until 31 January 2005, thus allowing cash contributions to the tsunami relief efforts to be deducted from 2004 income taxes.  Another factor is how easy it is – the ease of giving has dramatically increased over time with the widespread use of the Internet and social media.[1]  Now you can donate to the disaster of your choice from the comfort of your home via the Internet, as well as from your mobile phone.  The days of telethons have long since passed.

The point of this blog is to illustrate the power of media in directing our altruistic actions.  More severe devastation and loss of life in certain parts of the world receive significantly less media attention than other events in parts of the world that are seen as central to the American way of life.  Hurricane Katrina is a prime example.  Home turf trumps all other factors in determining coverage.  Other disasters receiving significant media coverage all occurred in areas of the world central to American political, economic, and military interests.  The message is that if you live in a remote, poor, non-oil producing area, or one that lacks some central geographical feature of economic importance, you are not likely to receive much international disaster assistance.

The comparison between the coverage of Hurricanes Stanley and Katrina is particularly powerful.  Hurricane Stanley caused slightly fewer deaths than Hurricane Katrina, but the amount of aid received by those affected by Stanley was almost nonexistent when compared to Katrina.  “The Hurricane Stanley emergency stands out as the worst indictment of the selfish Western approach to humanitarian disaster…It is clear that our human inclination toward altruism is guided in predictable ways by the media to reflect Western political and economic interests with little regard for the magnitude of the loss of life.” [2 p 6.]

In sum, I am reminded of one of President Obama’s justifications for considering military intervention in Syria and for continuing the war in Afghanistan – it is in America’s political and economic interest.  Given our gullibility and wealth, coupled with the guidance of the media, Americans give too much to disasters that do not warrant it, and forget those that do.  Given Americans’ short attention spans and the attendant 24-hour news cycle, events do not maintain their salience very long.  The consequences of natural disasters go on for years, but news coverage only days at best.  Except for Katrina and Sandy, two disasters on American soil that keep on giving to journalists, thus warranting annual visits and check-ins, disasters are here today, gone tomorrow.  So much for altruism and humanitarian aid in natural disasters.